William Powhida, 'No One Here Gets Out Alive'
at Charlie James Gallery, Los Angeles
Review by A. Moret 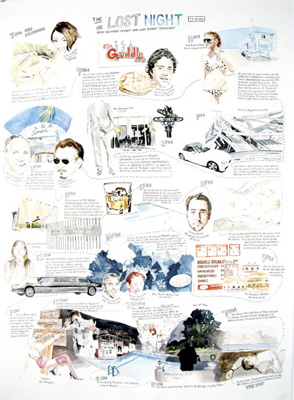 For William Powhida "I" is an Other. This diabolical "otherness" is not a wholly separate entity of ourselves, rather it is (re)presented in our own image, to say what we cannot. The underlying tension created in his recent show at Charlie James Gallery, "No One Here Gets Out Alive," is the battle between artist and art critic William Powhida and his quick-witted, twisted-tongued, narcissistic alter ego who shares the same name. By filtering his voice through his alter ego, Powhida is without inhibitions, and the subjects of his trompe l'oeil renderings on what appears to be torn pages of notebook paper taped to the canvas signals a revolution in the art space. The manifestos question the politics of the art world, and critique the role of the patron, the critic, and the artist who will adopt any persona to achieve celebrity status and success.

In New and Unimproved Tips for Artists Who Want to Sell, Powhida offers his fellow artists points to consider when making their work. Powhida underscores that his fellow artists should "accept capitalism [because] your art is only for rich people," and to remain "sexually available because you're on sale.' Powhida's final note is, if all else fails, "just sell your soul to Larry" (Gagosian). The crux of "No One Here Gets Out Alive" reveals itself in the installation of a bathtub in the middle of the gallery; though it does appear to engage in a dialogue with the rest of the works, the limp plastic limbs are a stand-in for Powhida. Behind the drawn shower curtain we see that the tub is filled with empty beer cans and bottles, while a pair of gold Ray-Ban aviator sunglasses carefully rests on top of a bottle, as if standing in for the artist himself. The glasses appear again in "Powhida" the movie trailer and help to characterize the artist in press profiles from the New York Post, LA Weekly, and 944 Magazine. "No One Here Gets Out Alive" is the ultimate turning of the screw, as it presents the works of an artist who considers himself and the work he presents in the gallery space to be "meta art," and consequently speaks to the dueling nature of William Powhida and his fictitious alter ego.