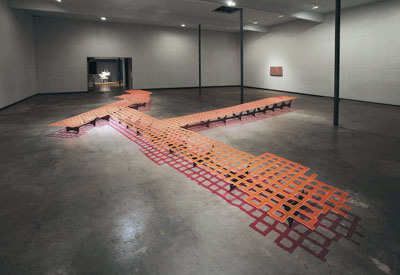 How to make abstract art into political art is a task that has preoccupied--and stymied--many artists over the past two decades. Leo Saul Berk's new work is a good example of how such attempts can both succeed and fail. As far back as Robert Morris and before, abstraction's appeal has frustrated those who desire its formal clarity but are dismayed by its resistance to partisan content. The largest and best work in this show, Quecreek Mine (2009) is a schematic plan of a mine in Pennsylvania where miners were trapped for 72 hours. Dramatically lit, the perforated-grid, DayGlo orange plastic sheets hover above parabolic walnut struts that resemble 1960s coffee table legs. At 30 feet wide, the work takes full advantage of the gallery's lavish empty spaces. Geometric and free-form, its formal powers are paramount. Tora Bora (2009), ostensibly a wooden extrapolation of Osama bin Laden's lair, works better as a discrete abstract sculpture, free of tedious politicizing. Networks of geometric systems, not stairways or hiding places, reveal intricate structures of angles and curves, testament to the soft carvability of basswood. With upright "legs," it solves its own problem of positioning and support, generally Berk’s greatest weakness.

Rattling House (2008) also purports to be inspired by caves, one in Afghanistan in this case. Whatever its far-flung source, Rattling House gleams above its sleek black support, cast in vivid yellow plastic, almost more animal than architecture. Just shy of organic abstraction, Berk's flair for industrial materials keeps things on a crisp, no-nonsense level. Spider Hole (2009) eludes sculptural support altogether by suspending itself from the ceiling. Shimmering yellow due to micro-crystallized glass shards, Spider Hole unravels Berk's political subjects--in this case, Saddam Hussein’s hiding place--once and for all. A spectacular yellow cube with threatening phallic undergrowth, it renews formal issues such as shape and form, surface texture and volume, mass and placement. It points toward a greater impersonality in Berk's future, a realm free of social encumbrance and strained meaning.