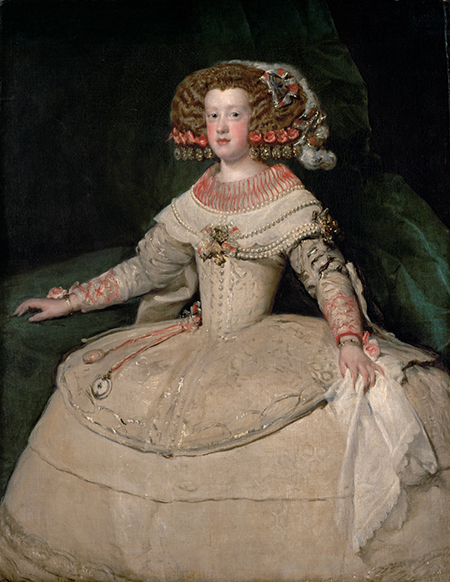 “Hapsburg Splendor” presents nearly 100 extraordinary treasures from Vienna’s Kunsthistorisches Museum, many of which have never before traveled outside of Austria. From suits of armor displayed on horseback, to master European paintings, to a full-size 18th-century carriage complete with two white horses, the show is remarkable for combining range and quality. The masterpieces and rare objects all date from the Hapsburg Dynasty, which rose to prominence in 1273 and continued until the end of World War I. At its height, these powerful rulers controlled an empire that included much of Europe, including Austria, Germany, Spain, and Burgundy. Key figures included 15th century Holy Roman Emperor Frederick III, his son and successor, Maximilian I, and the latter’s successor, Charles V.

The show is divided chronologically into the dawn, golden age and twilight of the empire. Treasures from the early years include those of Maximilian I, who considered himself “the last knight.” He prided himself on his jousting, hunting, fencing and even dancing. Maximilian staged more than 60 jousting tournaments followed by lavish banquets and masquerade balls. The first gallery features elaborate armor, weapons, sabers, tapestries and other precious objects. The second gallery is arranged like a Kunstkammer or Wunderkammer (collection of curiosities). During the Renaissance, noblemen began filling rooms with objects they collected to show off their intellect, passion and means. One of the more amazing objects in this room is a rare crucifix, notable for the expressive face of Christ, his graceful elongated limbs, and the extraordinary detail in his crown of thorns.

The golden age contains the largest, most impressive objects and paintings in the exhibition. An astonishing picture gallery brings together paintings by Europe’s leading artists, many collected by Archduke Leopold Wilhelm while living in Brussels, where he served as governor of the Spanish Netherlands. He acquired paintings by Velázquez, Rubens, Giorgione, Titian, Tintoretto and others. Key pieces being seen in the U.S. for the first time include Caravaggio’s “The Crowning with Thorns” (c. 1602/04), Hans Holbein the Younger’s portrait of Jane Seymour (1536), and Correggio’s “Jupiter and Io” (c. 1530/32). Velázquez’s portrait of Infanta Maria Theresa (1652–53) depicts the daughter of Charles VI, who would go on to marry Archduke Wilhelm when she was 16 and he was 40. After his death, she married Holy Roman Emperor Francis I and bore 16 children, including two queens, a duchess and two Holy Roman emperors. Maria Theresa was able to evoke both esteem and affection from her subjects during 40 years of rule.

A Baroque ceremonial carriage and a winter sleigh, both drawn by the famous Viennese Leipzig horses, illustrate the wealth and taste of the Habsburgs. On loan from Vienna’s Carriage Museum, they arrived in sections and had to be lifted through the windows by crane. The former is a stellar example of an 18th-century carriage, while the latter features lavish horse trappings covered with tinkling bells. Both include carvings by master craftsman Balthasar Ferdinand Moll and are presented in front of a Flemish tapestry so large it barely fit on the wall.

The exhibition concludes with works from the early 19th century, when the fall of the Holy Roman Empire gave rise to the Austrian Empire, then ruled by Franz Joseph. A spectacular display of official court uniforms and dresses includes an elegant black-velvet ball gown made for Empress Elisabeth (c. 1860/65) and a knight’s robe embroidered with gold. A vintage film portrays the funeral of the last emperor, Charles I, who died in 1916, bringing the Habsburg sovereignty to an end. The Habsburgs used strategic marriages, political alliances and conquest to rise and stay in power for more than 600 years. The show’s organization into three sections, each featuring a three-dimensional “tableau” as context for the other works on view, is easily comprehended, and the viewer comes away with a profound appreciation for the splendor of the Habsburgs.