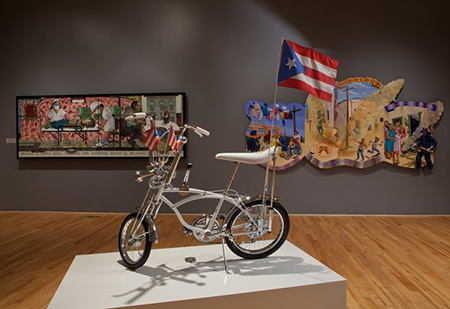 Published over 30 years ago, Sandra Cisneros’ novel, “The House on Mango Street,” is a true American classic, as well as a pioneering contribution to the canon of Chicana literature. Cisneros’ book is divided into short vignettes, each capturing a person, a site or significant event in the narrator Esperanza’s young life growing up in a Latino neighborhood in the city of Chicago. “The House on Mango Street” is a story about coming of age in an urban, working class environment, where cultural heritage is alternately reinforced and challenged, and girls must navigate the limitations and expectations that gender-biased traditions put upon them. Cisneros’ rich subject matter is echoed in this exhibition, curated by Cesáreo Moreno, and the theme of multiculturalism gets expanded and updated through the visions of artists of various ethnicities from around the country.

Not surprisingly, the majority of works in the exhibition are figurative paintings, hinging on portraiture and the kinds of social and political narratives born of muralist traditions. However, several pieces break the mold with dynamic sculptural objects and installations. In a pair of works, New York-based, Puerto-Rican-born artist Miguel Luciano employs facets of the vernacular to address the confluence of racism and labor issues in the U.S. In “Freedom Rider: Homage to Felicita Mendez,” a black leather biker vest memorializes the civil rights leader with her name emblazoned in embroidery, combined with vintage buttons sporting insignia from both black and Latino liberation movements. The custom low-rider Schwinn bicycle of Luciano’s “Porto Rican Cotton Picker” turns the racist history of that luxury American bike on its head; what was originally produced on the cheap in the 1970s via exploited Puerto Rican laborers is transformed into a gleaming chrome homage to this boisterous facet of Latino culture.

While some works in the exhibition, like Luciano’s, are frank and fervid, others, like Tomie Arai’s “Arrival,” quiet things down with a contemplative mood. In the Japanese-American artist’s installation, an empty chair and a pair of tiny sandals sit on a wooden platform before a bundle of boards bound together with twine. Upon the boards are printed images of chickens, brushes, turtles, fans, boats, teapots — all referencing the Shinto practice of writing one’s prayers and wishes upon votive tablets. The scene is rather solemn, as the chair and sandals sit abandoned and empty. The title suggests a past familial immigration, leaving it to the viewer to decide whether these hopes and dreams ever came to fruition.

While the vast majority of the works in “The House on Mango Street” address issues of cultural identity, a few reflect one of the book’s most pointed and resonant themes: female sexuality. Jessica Pizana Roberts’ video work, “Lemon Drops,” tackles the confusion and violence of Esperanza’s experience of young womanhood. In the video, the performer wears a rhinoceros mask with a “horn” made of yellow wax shaped like a woman’s high heeled shoe. The masked performer is then bombarded with an army of hairdryers, melting the shoe until it slips from the mask and smashes to the ground. An especially poignant chapter of “The House on Mango Street” recounts the narrator and her friends receiving a bag of hand-me-down pumps. The girls’ initial thrill with being gifted such a pined-for and grownup style of shoe gives way to panic and shame, as new attention from the neighborhood men turns predatory and sexual. The symbolism in the video illustrates this incident rather than running with it aesthetically, but it is nonetheless a profoundly insightful representation of the drama and danger that punctuate practically every woman’s adolescence.