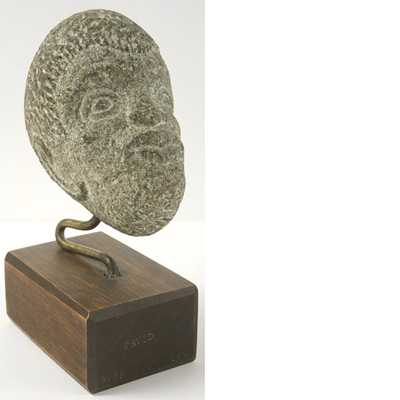 James W. Washington, Jr. was the only African-American member of the Northwest School and, as such, occupies a special place. Eschewing Mark Tobey's Baha’i faith and Morris Graves's occult posturing, Washington's proselytizing Christianity provided an abrupt, unexpected shift among the "mystics," but one no less esoteric and eccentric. Washington was acclaimed in New York as early as 1960 by critic Irving Sandler in ARTnews. The Woodside/Braseth Gallery's grouping of 21 paintings and sculptures is drawn from private collections and the James and Janie Washington Foundation (which offers studio residencies in the couple's former home in Seattle's Central District). More culled than curated, the selection nonetheless confirms rather than refutes prior critical judgments about the artist who died in 2000 at age 91: i.e., that the figurative busts and heads of Africans and African-Americans, like David (1958) and Prophet (1980), are stronger than the ubiquitously popular birds (Grouse, 1967; Raven, 1973).

This time around, Washington seems less naturalist and proto-ecologist than mythic pantheist and spiritualist. Despite often species-specific titles like African Grouse (1969), the feathered creatures share a strange inter-species resemblance. Robin No. 30 (1973) sums it up. With the last retrospectives in 2002 at Washington State Trade and Convention Center in Seattle and Washington State History Museum in Tacoma, it could be time for a deeper, more culturally contextual look. The artist benefited from a Smithsonian scholar's 1989 book-length study that placed him in the broader realm of American art, especially William Edmondson and William Zorach.

Early paintings like The Making of the United Nations Charter (1945) and Democracy Challenged (1949, about lynchings) make one wonder whether the encounters with Tobey and his cohorts were all that good an idea. Instead of carving cuddly birds, squirrels, and hedgehogs, he might have become a distinguished painter of civil rights history. A 1954 meeting with Martin Luther King, Jr. has also gone unexplored. Despite loose biographical ends that merit further review, Washington's art deserves closer study, both for its ecological and humanist dimensions.