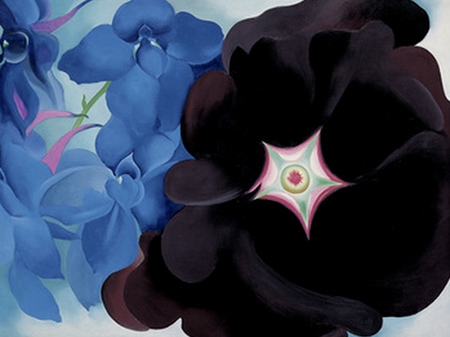 “Color, Line and Composition” brings together a cross-section of Georgia O’Keeffe's work that is not widely known and moments in the iconic artist’s life which have not been examined by the public. The show is partially documentary in its narrative flow from gallery to gallery. It demonstrates why O’Keeffe’s late work continued to exert influence on the aesthetic movements of her younger contemporaries, most notably color field abstraction and minimalism. O’Keeffe is seen here to be a brilliant colorist and a perfectionist in her journey to master the subtleties of natural linearity.

The show opens with O’Keeffe's early work from New York, starting with a painting of the skyline outside the Shelton Hotel in Manhattan.  The squared, perpendicular lines of the urban landscape are complemented by the dark browns and blacks of shade and the artificial yellow of street lights. This was also the period during which she lived with her celebrated partner, the photographer and art dealer Alfred Stieglitz. Of course, this urban aesthetic was not to become her main subject, nor would it be the definitive work of her career. In 1949, after Stieglitz' death, O’Keeffe, who had already visited New Mexico numerous times, made a permanent relocation to the Ghost Ranch estate in Abiquiu, where she would make her most iconic work.

The next gallery offers images of her studio at ghost ranch taken by the photographer Todd Webb. The paintings here are certainly the most impressive on view, and visitors who have come to see the O’Keeffe textbooks will want to spend the most time in this room. The best work seen in the exhibition is from late in her career, the 1960s, and showcases her close, soft focus on cow pelvis bones, seemingly emulating color field while still conveying O’Keefe’s signature commitment to subject and form. The zoomed perspective from which the painter worked allowed her to meticulously explore the naturally occurring lines of the bone and also experiment with nuanced color and vibrant gradient, perhaps inspired by an Abiquiu sunset.

Also to be seen in this gallery are feminine, reductivist flowers and cow skulls, also from this late period. Her emeritus work is often treated over-reverentially, and with good reason, but it is also essential to bringing together O’Keeffe’s New Mexico years as an integral part of the complete narrative of the show.

The exhibition takes an intimate turn in the next gallery. Lining the walls are a series of candid photographs by Webb showing O’Keeffe on a river trip, in Glen Canyon with friends, swimming and sketching. This room best personifies the adventurous spirit of the artist. The paintings here are in dialogue with the same themes of the cow pelvic bones; the perspective closely focuses in on the pure linearity of the canyon walls, moving away from representation and again an exploration of the Southwest’s color palette ensues.

The excitement generated from such an intimate look at the artist's work is cooled down in the final gallery. The viewer is invited to meditate on the minimal watercolors from the 1970s. The works on paper are perhaps the thesis as well as the conclusion of the show. O’Keeffe playfully crafts line and color late in her life, while alluding to the shells and flowers she will always be remembered for. Looking at these minimal compositions has a calming effect, the contrast particularly effective after being awestruck by the artist’s earlier work in the exhibition.