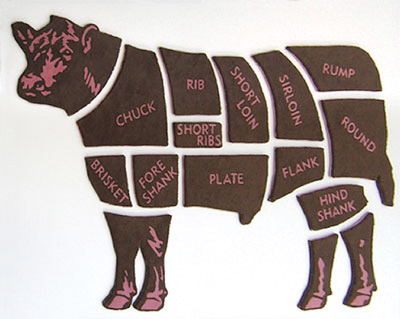 Above all, Jim Riswold is a satirist. Through photographs of iconic action figures, as well as sculpted and manufactured objects, he does not so much skewer as drolly point and poke at the contradictions and pretensions of our post-Pop cultural ecosystem. In previous outings he has defanged dictators and messiahs with a gentle but precise wit, placing eBay-purchased Hitler figurines alongside Lego swastikas as a critique of neo-Nazism, for example, or plopping a ceramic Jesus in an Easter basket next to a chocolate bunny to depict the commercialization of spirituality. In "Art People and a Cow" (a reference to Damien Hirst's notorious formaldehyde calves), Riswold takes on the capricious and incestuous fiefdom of contemporary art, using Hirst as a point of departure. Garnished Hirst Tartare presents the British artist's face as a mold of raw ground beef on a platter sprinkled with parsley sprigs, gherkins, and an egg yolk. Damien Hirst Makes a Rug is a deconstructed chart of beef cuts, fashioned out of carpet, while fellow A-lister Jeff Koons gets turned into an elaborate gift bag filled with chocolates. Riswold takes on iconic deceased artists as well, presenting Andy Warhol as a toy robot, Robert Rauschenberg as an aspic salad, Roy Lichtenstein as a yellow dot attired in suit and tie, Frida Kahlo as a chart of medical maladies, and Jean-Michel Basquiat as a doll annotated with text highlighting the painter's meteoric rise and untimely death.

As if fearing that lay viewers might not understand the in-jokes upon which most of these pieces depend, Riswold supplements each work with an explanatory placard. While the uninformed may find these explications helpful, Riswold's intended audience, presumably art collectors, are apt to see them as overkill. Impeccably executed and possessed of a striking graphic elegance, these are images that speak for themselves. Although he almost always deals with subversive matter, Riswold is wise never to hit viewers over the head. The most effective satire is often better delivered with a nudge than a rapier. Swift knew this, and Voltaire, and Carroll. In their footsteps, Riswold laughs not only at, but also with, the subjects of his critique.