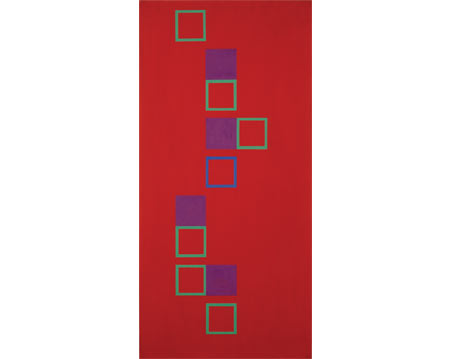 Sometimes stereotypes are so deeply ingrained, people hold onto them long  after they are disproved. A good case in point is Latin American Art. Just mention its name and, subconsciously what leaps to mind? Visions of magical realism; the social realism of Diego Rivera, David Alfaro Siquieros and José Clemente Orozco; Day of the Dead Mexican kitsch.

Enough already. Latin America consists of 26 different countries, not just Mexico. Each has evolved through time and horrendous political struggle to develop its own aesthetic voice. Please recall all of the violent events that took place during the 20th Century, then acknowledge that "artists create out of the world in which they live." This simple awareness provides valuable insight into the art that has been created south of our border.

"Sites of Latin American Abstraction" is a telling example of this transformation. The massive show includes about 200 selections of geometric art created from 1930 through the 1970's by 81 artists from Argentina, Brazil, Colombia, Mexico, Uruguay, and  Venezuela. Organized by the Cisneros Fontanals Art Foundation in Miami, Florida, and curated by Juan Ledezma, this collection of drawings, paintings, prints, photographs, sculptures, and mechanized constructions is so sophisticated and so well informed by world-wide art movements, it will dispel any outdated, stereotypical thinking once and for all.

It should also be noted that "Sites of Abstraction" is the first exhibition under the leadership of MoLAA's new president, Richard Townsend. As such, it charts an entirely new direction for this 13-year-old institution.

There are many works in this exhibit that are worthy of mention  but we can only describe a few of them. Do not miss Gago's delicate, stainless steel wire sculptures that hang from the ceiling like spiders' webs.  A German refugee of the Second World War, Gertrud Goldsmidt (Gago) escaped to Venezuela in the 1930s and made a new life for herself as both artist and architect. Then there is Leo Matiz' exciting, black and white photograph, "Estructura de Petroleo," taken at a 1950 industrial site in Colombia; Lygia Clark's sleek, aluminum and steel, 1960's-era sculptures created in Brazil; and Feliza Bursztyn's elegant, 1970s, crisp geometric table-top constructions, to single out just a few.

As might be expected from the once totalitarian, militaristic countries in South America, creative expression is often austere, foreboding and minimal. And frequently it is executed in black and white. Even when vibrant color is incorporated, as in Alejandro Otero's painted grid, "Coloritmo 41," it evokes the feeling of life behind prison bars.

When visitors enter the museum they are confronted by Mathias Goeritz' gigantic wall-relief, "Mensaje: Decoracion Mural" (1970).  In it a wooden plank has been painted gold, then poked repeatedly with patterns of holes. The overall impression suggests a tarnished landscape that has been ravaged by outside forces. Considering the back story that Goeritz escaped from Berlin to Mexico City by way of Morocco and Spain, the effect is overpowering.

Swiss-born Mira Schendel studied philosophy in Milan,  Italy, before her family fled Europe to escape Nazi persecution. Settling in  Brazil in 1949, she began making minimalist art in the 1960s. Her black and  white "Transformavels" (a riveted chain of transparent acrylic strips) is full  of wit and irony, as is her single black "Shingle," attached to an empty field  of white.

In fact, both before and after World War II, many artists from Latin America traveled to Rome and Paris to learn what was happening in European art centers. Upon their return they often incorporated the new methods they discovered into the artistic expression of their native lands. Add their experiences to those of  the immigrants who sought refuge in Latin America during that period; true to Marshall McLuhan's prediction, the world was fast becoming "one big global village."  If there were no labels serving to identify the works, visitors wouldn't know whether the art was created in Europe, South America or the United States.

Thanks to "Sites of Latin American Abstraction," a new door has opened into our neighbors' creative community.