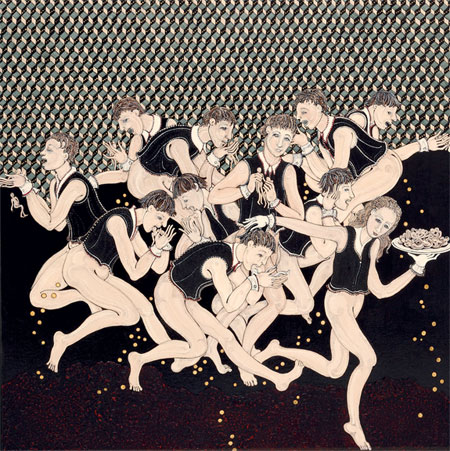 Stephanie Wilde is a Utah native who has spent most of her career as a painter, pen and ink artist, and printmaker based in Boise, Idaho. Self-taught and intense, Wilde is a meticulous craftsman with wide historical interests, an artist of intelligence and, above all, conscience. Her art often doubles as a vehicle for drawing attention to the issue of human suffering in an indifferent world, most notably her multiple series in the 1980s and 90s focusing on the AIDS epidemic in Africa. In “Harmed,” her show of new work at the Salt Lake City Art Center, she continues this personal crusade with a vengeance, setting her sights on the corporate culprits responsible for the financial havoc worldwide, and its subsequent toll.

Were it not for her contemporary subject matter, Wilde’s imagery would seem from another time. Her reliance on narrative and allegory, the carefully choreographed stylized figures, intricate abstract patterning, use of gold leaf, and overall flatness of composition bear a striking resemblance to Renaissance tapestry art. Her extensive knowledge of symbols lends an esoteric air to the work as well. Another aspect that sets it apart is Wilde’s exquisite presentation aesthetic. Altogether, the results can be both dramatic and poignant, precious and intensely felt. Harmed is comprised of 48 painted panels presented in pairs and installations. Although it was completed between 2006 and 2009, Wilde actually began the project in 2000 in the aftermath of the Enron scandal and similar debacles. It is an indictment of blind greed and willful fraud that recalls printmaker/painter William Hogarth, the 18th-century British satirist.

The vehemence with which Wilde portrays these unconscionable acts is startling, even for one familiar with her art. In the title piece of the show, the 13-panel installation combines the nightmarish imagination of a Poe with the decadent overtones of Hieronymus Bosch. In Harmed’s central panel, crazed financiers devour human hors d’oeuvres and defecate gold coins in a Boschian scene of depraved licentiousness, while adjacent panels depict naked, ashen figures stranded on bloody composts of earlier victims. Other works like Watchful and Falling, if less explicit, are unsettling as well, yet Corporate Death’s Day-of-the-Dead motif is almost humorous. The exhibit is a singular mix of cultivated aestheticism and biting social commentary that one is not likely to forget.