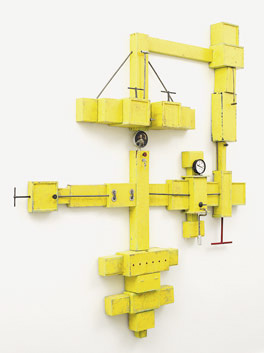 Unlike most commercial art venues in Denver—or anywhere for that matter—Plus Gallery occupies its own specially designed building that was constructed specifically to display art. Expertly created by prominent architect Steve Chucovich at the behest of owners, Karen and Ivar Zeile, the small but swank space is positively out of this world. Cutting edge art is the specialty of the place, with a good example being the impressive exhibit called “Industry” comprised of a series of closely related wall sculptures by Jonathan Saiz that, taken together, function as a unified installation. Saiz, a young emerging artist, was born and raised in Denver, but his art education took him to Paris, Berlin and New York before he returned to town a few years ago. Currently he maintains a studio at RedLine, a co-operative that combines studio and exhibition space for selected (and vetted) artists.

“Industry” features some of his most recent efforts, and they’re very intriguing. Saiz has built small boxes and assembled them into stacks or rectilinear arrangements. The title of the show is perfect not only because every piece is painted “safety yellow,” like the pipes in a boiler room, but also because the overall forms of the works are suggestive of machinery. And if that weren’t enough, Saiz distresses the paint and has also incorporated small found elements like gauges, dials and locks, all of which push the mechanical analogies even further. Another feature shared by all the pieces is odd and distinctive; it’s the subtle insertion of a small reproduction of an old portrait taken from the history of art into the middle of the sculptures. These portrait-elements are so minimal, and so different from the rest of the works, viewers may at first not even see them. For Saiz, though, they are significant since these portraits, all of which depict women, are meant to evoke the idea of “femininity,” and thus contrast with the overall sense of “masculinity” expressed by the predominating machine-imagery. But this figurative element and its implicit narrative dialectic do not detract from the otherwise essentially abstract and constructivist character of these beautiful pieces.