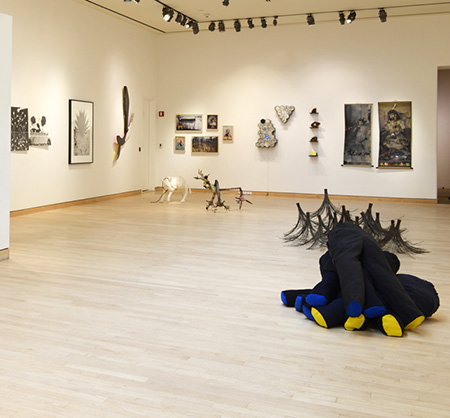 For the past five years Axle Contemporary has enriched the Santa Fe art scene with pop up shows in their alternative space, the shiny aluminium commercial truck seen around town in ubiquitous locales. "Axle Indoors” is a survey of all the artists who have squeezed into the 6x10’ mobile gallery during that time. The exhibition is essentially a roll call of Santa Fe  established and emerging artists, featuring nearly 150 of them working in myriad media.

Conceived as the brainchild of artists Matthew Chase-Daniel and Jerry Wellman, the walls of the 1970 stepvan are often covered in work salon-style. It is known for experimental installations by a single artist making use of the entire space, (look for Aline Hunziker’s installation, "Cast Away," opening in the mobile gallery on February 27). Both of these attributes, of the salon and installation, shine through in the delicately curated show at the less nomadic Peters Projects space.

Each room has strong themes that connect the artists coherently, with smooth, seemingly effortless transitions from room to room. Starting in the front gallery, a visual thesis statement appears. The work here is both playful — as seen in the cartoon-like images of David Sloan, Dianne Stromberg’s depictions of the Hindu god Ganesh, and Luke Dorman’s word bubbles — and formal — as in Christy Georg’s rope sculptures, Will Wilson’s photography and Willis Lee’s “Subjacent." This represents the essence Axle’s projects over the years; they are never afraid to have some funk but always with a sharp eye for formal, elegant art.

In the back room hangs the cubist and abstracted work of Jay Etkin and Danielle Shelley. A small testament to Canyon Road, blocks away from Peters Projects, is seen on a nearby wall in Abraham Gelabart’s work. Turn right into a small nook for the immersive experience of an alluring video from Steina. On the opposite wall are Meridel Rubenstein's holograms of leaves and a beautiful sculpture of planets in orbit by Peter Joseph that is epic, imaginative naturalism.

Continuing into the next room, we find ourselves contemplating humanity’s own detritus in the detailed graffiti photography of Duane Monczewski, the collaged and painted cardboard of Susan Case and the bronze casts of Nintendo Game Boys by Chris Collins. Gestural use of color is also seen in the work of Sam Scott.

If at this point the exhibit gets hyperactive, we then take a left and our visual palette cleansed with the minimal naturalism of Fran Hardy, Nina Elder and Joanne Lefrak. This room also engages us with an aesthetic of the multiple, as seen in the bundles of wood by Lisa Freeman and the grid forms of Jennifer Joseph.

The walls of the galleries are certainly full, but not over-crowded. Instead of choosing a handful of the best known artists, Chase-Daniel and Wellman more democratically include the lion’s share of artists from their history. Bringing so much that was presented in the cramped quarters of a mobile gallery over a five year period to this relatively grandiose exhibition space all at once turns out to be an invigorating step towards connecting one of the city’s most preferential galleries with a scrappy alternative space that represents a slice of the vital and growing art scene in Santa Fe.