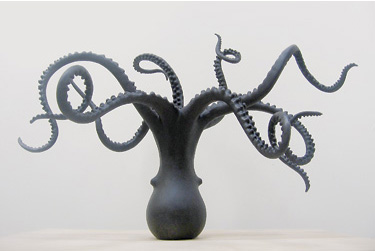 For his eighth solo show at Greg Kucera Gallery since 1985, Mark Calderon continued to populate his dark and mysterious world with flora and fauna, reptiles and birds. Cast lead and bronze sculptures were joined by a 15-foot-high, stacked-module Endless Column (2009) made of paraffin wax, and by Globo (2009), a seven-foot-high, lead-covered phallus with a flurry of embossed-metal patterning across its surface. Although Calderon has been included in Hispanic-themed group shows, his sources are much deeper and wider than his heritage and the work he showed in “Santos,” his 1997 print survey at The Print Center in Philadelphia. India, China and Japan are also inspirations, as the new work suggests. (He has also had other solo gallery and museum shows in New York; San Jose; Helena, MT; and Portland, OR.)

A unique mixture of death and Eros, Calderon’s art embraces generative as well as decaying forces, presenting a compelling and enigmatic vision. Now 54, the San Jose State University-educated artist (BA, 1978) blends abstraction and representation in ways that reinforce a pluralistic approach to the natural and manmade worlds. While Endless Column is sleek and translucent with its pale white, waxy blocks, Nocturne (Octopus, 2007) is an inverted sea creature stuck on its head, caught as if wiggling fiercely to right itself. Similarly, Blast (Double Bloom, 2009) seems like two attached gramophone speakers hovering on a low pedestal; it accompanies Plumita (2009), a smaller variant that resembles a 10-pointed candelabra. Hummingbird and Mice (both 2009) are a bit twee, cuddly and adorable, though dead and inert when executed in lead.

Three wall-mounted Snakes (1-3, 2009) liven things up with S-curves, curlicues, and looped heads and tails, all rigid and harmless in bronze and lead. Skink Twins (2009) is a pair of copulating lizards. In Calderon’s “dominion,” the fertility of nature is encased in metal, reminiscent of freedom but forever caught in a melancholy sadness.