Crystal Liu, 'Give Us Our Dream: Part One'
at Hosfelt Gallery, San Francisco
Review by Kristen Evangelista 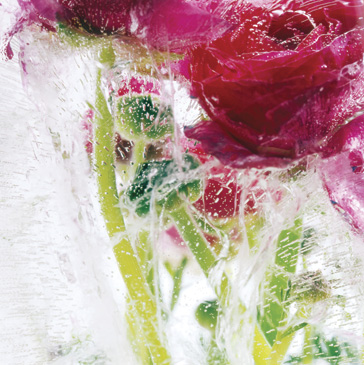 In her new series, "Give Us Our Dream: Part One," San Francisco-based artist Crystal Liu takes an experimental approach to organic materials: the artist photographs flowers frozen in blocks of ice. Surprisingly, the exposure to extreme temperatures does not destroy the delicate blossoms worthy of wedding bouquets. Instead, the ice arrests their decay and protects them almost like millennium-old arctic specimens. Liu produces larger-than-life views of lustrous petals and verdant stems against a milky-white background. The starkness of the frigid surroundings intensifies our appreciation of the precious buds, which endure in a hostile environment. The ice acts as a lens, subtly distorting the blossoms’ appearance and infusing the compositions with an otherworldly quality. Liu’s images conjure unexpected associations and possess an uncanny depth and texture. For instance, iris two features a radiating pattern of ice that suggests a soft wispy feather. Ice striations in iris one evoke luscious purple brushwork akin to painting. Other images, including peony four, feature streaks of bubbles trapped within the ice that paradoxically allude to motion in a scene that is utterly frozen still. In anemone five, a mysterious pink liquid amidst the petals leaves us to wonder if there is more than pure nature at play.

Bouquets of roses and ranunculi often accompany some of life’s most cherished moments. The carefully cultivated florets with fanciful names embody our hopes and fantasies. Liu’s act of freezing the blooms suggests a desire to preserve and prolong the enjoyment of such treasured occasions. This sentiment is reiterated by the series’ title, which inflects a wishful innocent tone. Yet several of the images reveal cracks and fissures in the ice’s surface, perhaps insinuating the fragility of these expectations. In keeping with her earlier series, Liu re-envisions her surroundings through her obliquely cropped close-up views. Her latest works depict flora in formal compositions that verge on abstraction, and offer an alluring reinterpretation of what would otherwise be a traditional still life.