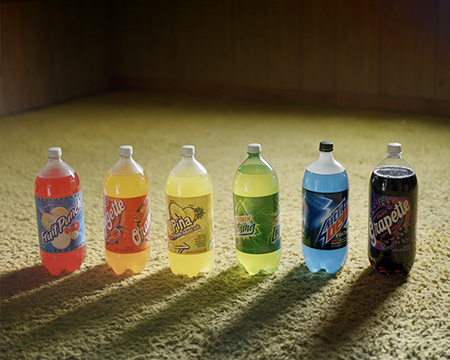 In her 7-year long series, “Hold Together,” Chicago-based photographer Lisa Lindvay is not only impressive for her technical facilities — her aestheticism and expert craftsmanship — but in the heart that resonates throughout the exhibition. The “heart” that Lindvay imparts through her works is not the cheesy kind, the sort that is characterized by optimism, sweetness and feel-good harmony; rather, through her works, Lindvay builds a palpable aura of pride, acceptance, pleasant and unpleasant truths, and bravery, both on the part of the photographer as well as her subjects.

“Hold Together” chronicles the Pennsylvania home life of the now Chicago-based photographer. Lindvay makes it known to her audience that the figures in the series are her own brothers, sister and father, and that these portraits are intended to address the impact of her mother’s absence due to mental illness. The artist poses her subjects carefully, their expressions somewhat emotive though not particularly dramatic — indeed, mostly sullen or detached. Lindvay’s backgrounds are decidedly unstaged, with unmade beds, threadbare linens and unmatched athletic socks signaling the kinds of domestic minutiae that falls by the wayside without a typical adult maternal presence.

It’s undeniable that the degrees of sadness and weariness are a major part of what makes the works in “Hold Together” so visceral and affecting. Lindvay pictures her bare-chested, mustachioed father in his rumpled bedroom with a defeated expression, or clutching his forehead and gazing into the distance with a furrowed contemplative brow. In “Nick in Front of the Hole He Put in His Wall,” the shirtless adolescent holds his hands to his face, the roughly torn drywall visible behind him. The delicateness of the young man’s hands contrasts with the roughness of the background, suggesting a destructive moment long passed.

While the artist pictures both genders in her works, her treatment of the male figure is especially powerful in the art historical symbolism she wields. While Lindvay’s sister is typically fully dressed, her father and brothers are often depicted in various states of undress. The photographs of the younger men, shot alone or together, emphasize the soft flesh of their lithe frames, and in tandem with their impassive expressions recall the nubile, feminine youths of Classical sculpture. In “Hot-N-Ready,” someone holds an empty pizza box behind the topless youth, the circular grease stains on the cardboard mimicking a halo behind his head. The visual pun injects some solemn absurdity to make a tongue-in-cheek play on the kind of Christian iconography that romanticizes hardship and sanctifies suffering.

Throughout “Hold Together" junk food features almost as prominently as her family members. Nacho Cheese Doritos and dusty cheesy puffs stand out like beacons of artificial color, pictured just as repulsive as they are appetizing. A rainbow of 2-liter soda pop containers glow sublimely with the natural light from a nearby window. These kinds of foods convey content beyond that of inadequate nutrition, they speak of culture, class and taste. Ubiquitous within lower-income communities, junk foods serve to immediately and concisely fracture notions of the upper-middle class domestic life that American culture holds in such high esteem. “Hold Together” illustrates deeper truths by not attempting to present the image — the deception — of a shiny, idealized nuclear family unit. Lindvay and her collaborators are made vulnerable, allowing how the family eats, lives, feels, interacts with and cares for one another to be presented in all its blunt frankness. The banal complexity of family life that Lindvay captures here makes these portraits not simply a narrative of hardship, but several poignant chapters of real life.