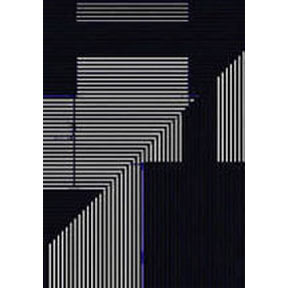 The work in “Sonochrome: New Work by Richard Garet” reads as a palpably appropriationist wink-and-nudge to early Minimalism and/or Fluxus-inspired sound art. Vertical white lines evanesce on black backgrounds in mid-sized prints in frames and large prints mounted smoothly on aluminum.  They seem to make forthright reference to Frank Stella’s page-turning black paintings of the late 1950’s and early ‘60s. When connected to the humming 4-minute video loop of the same pattern in mutation, the work in “Sonochrome” seems more like a Fluxus experiment in algorithmic creativity than Stella’s early and quiet Minimalism. Born in Uruguay and living in New York, Garet confesses as much, claiming Fluxus-father John Cage’s experiments with an anechoic chamber as inspiration for the subtle provocation of sound made from voltage emanating out of a projector.

There is a provocative tension between hands on high-art painting and hands off new media technique in this small exhibition.  With zapping lines reminiscent of the “snow” and “ants racing” on UHF TV and the drone of a hovering mother ship, the video “Sonochrome #1” has an air of low-tech fantasy, bringing to mind Stanley Kubrick’s “2001: A Space Odyssey.” The title of the show – sono (sound) + chrome (color) – suggests that, while the artist draws directly on the anti-art tactics of Fluxus, form is still central, if even only as the by-product of automation. Yet the strain of formalism at work here is somewhat misleading. While it looks to be coming out of a retrospective gaze at last century’s peregrinations in painterly abstraction, the tight, solid form of Garet’s sound-art-cum-video and prints is truly a matter of technological mediation. This is work about the double trope of mechanization and digitization, in particular art made by triggering computer glitches and repetitive problem solving, or the algorithm. It looks to be about painting, but is wholly new media in orientation.

The value and importance of artistic intention was long ago thrown out with the trash. In this instance its absence qualifies the installation in a pivotal way. The work’s similarity to Stella’s black paintings is but accidental and undercuts the power of the project. Because of this resemblance, Garet’s big monochrome prints on aluminum communicate prima facie as a clever engagement with the history of art, in particular the shift in painting from surface to object as triggered by Stella’s stretcher-bar dictated patterns and concretized by Michael Fried’s neologism “objecthood.”

It is not so problematic that the monochromatic patterns are accidental approximations of Stella’s paintings, and even if coincidental, the connection is there. Accident can reap wonders in art. In not being an overt act of appropriation, the patterns are technological ornament. Garet’s sly deployment of the algorithmic look and logic – repetitive form suggestive of generative art – here becomes something of a technological geegaw, a fun-for-a-minute screen saver or software effect.

In this impromptu engagement with painting’s history mid-last-century, Garet roots out the radix of Minimalism, locating it in the world of systems theory. The link between systems theory and contemporary art is nothing new. Writing in Artforum in September 1968, art historian, curator and artist Jack Burnham coined the phrase “systems aesthetics” to describe just this sort of work.  At that time Hans Haacke was the master practitioner of systems aesthetics. His “Framing (Condensation Cube)” (1963-65) and “MoMA Poll” (1970) mimicked the computer not so much in form but in logic, each using a feedback loop in the making of an open system. Light from the gallery entered the cube, reacted to a small amount of water inside, and droplets of condensation perspired on its interior. The poll calculated data, viewers’ votes on urgent political questions often focusing on Vietnam.

Garet’s work makes sense in this aesthetic field of systems theory. Unique from Haacke’s work, both of which proffer examples of “open systems” (interactive matrices that change over time), Garet’s video piece is a recorded four minute loop, making it, like the surrounding prints, an example of a “closed system” (a matrix of connections that functions in isolation from its environment). In keeping with art/technology guru Burnham’s writings, the formalist strategies of Greenberg and his beloved Ab Exers are all articulations of closed, autonomous systems.

Because Garet stands firmly on the other side of the divide, that it is to say in the realm of technology, we can be assured that his work is really about something other than autonomous form. If we follow this logic, we learn something unique about Stella’s black paintings, namely that his turn away from the heroic gestures and surfaces of then current painting to a mindless, measurable and monotonous coalescence of repetitive mark-making was part of a bigger and more general post-formalist strategy. The greater repercussions of that strategy would be the rise of conceptualism as an all-pervasive practice.

The elegantly simple prints and the mesmerizing sonic-optic projection of “Sonochrome” register like so many exercises in science fiction rumination – the Zenful infinity of white lines integrating and disintegrating within a black void.