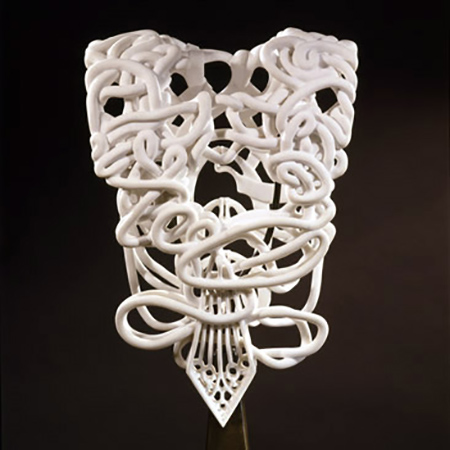 The object in its white purity looks as if it has been swept up by the ocean and deposited in the shallow surf, suggesting a mysterious sea creature that is impervious to its environment. On close inspection it has been placed there not by nature but by a human hand, an intricate form resembling a sort of lace collar carved from marble.

A wall-sized photograph of this unusual juxtaposition introduces viewers to sculptor Elizabeth Turk, a 2010 McArthur Foundation Fellow. Titled “Sentient Forms,” which offers us wriggle room between the notions that thinking creatures are being depicted and the artist is intelligent, this is not quite a retrospective. There are no examples of her early “Wing" series, but her acclaimed “Collar" and “Cage” series are well represented, as are multi-media works including drawings, x-ray photographs and installations. One large floor piece replicates undulating waves in wood and shoji screen paper. Hosting three cage-like forms carved from dark brown marble scattered across the gallery, one affixed to a rock, the installation somewhat abstractedly plays to her practice of placing her sculptures into real environments such as the ocean or a romantic koi pond.

Turk, who divides her time between her studio in Santa Ana and residences in Newport Beach, Atlanta and New York, is primarily known as a sculptor. However, the show illustrates that she draws as proficiently as she sculpts. She calls drawing the beginning of everything. Recent x-ray photographs of seashells are described as "X-Ray Mandalas." An x-ray image of a nautilus shell suggests, with elegant simplicity, the primitive beginning of all life.

To further illuminate the artist's thought processes, Kook-Anderson turned the third gallery into what resembles an alchemist’s den, filled with drawings that, ostensibly, presaged the sculptures and collages. Inclusion of a tiny sea urchin shell under a two-lens microscope illustrates her quest for inspiration through nature.

Then follows what might be called Turk’s signature work, the carving of a rectangular block (part of the “Cage" series) that is shown both in its solid entirety and as a finished creation of intersecting ribbons and loops. Although the uncut block is pristine, Turk says that she does draw lines on the exterior surfaces with inner cuts following an intuitive path. Placed upon a mirror, the carved marble “ribbons” contained in the rectangular form are simply breathtaking.

So are examples of her “Collars” series, which range from massive volumes that resemble a linebacker’s gear but which are inspired by Japanese Samurai, to delicately laced creations easily transposed visually onto a designer dress. Turk has taken collars some additional steps further. Rather than lacy and delicate, the newest collars have become replicas of kind of neck ruffs seen in 17th-century Dutch and Flemish paintings. She made these to celebrate Rembrandt’s 400th birthday and to pay homage to the fact that the mercantile class in the Netherlands had joined, if not entirely replaced royalty and clergy as supporters and commissioners of art.

Also worth taking in is Lita Albuquerque’s installation titled “Particle Horizon.” Centered on a blue female figure appearing to levitate in a white space, surrounded by stars of the Northern and Southern hemisphere, it features the artist's poetry and an atmosphere that compels us to linger and meditate the passage of time and the vast distances between our solar system and the stars of distant constellations. Yet “Particle Horizon” just as readily suggests that there is life everywhere and it’s just a matter of time and will until we make contact with it.

The blue figure is, of course, from a color palette that Albuquerque has used time and time again. Here it suggests transcendence of time and space and the transformative power of individual journeys.