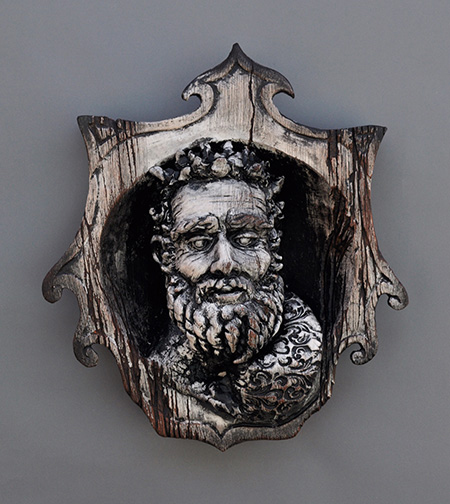 Paul Metivier’s new work builds on the considerable strengths of his earlier wall-mounted, carved-and-fired earthenware heads, but expands into other areas. Whereas the earlier heads were memorial portraits of white and black gang youths, the new pieces are still wall-mounted, but some of them use medallions or architectural cartouches to frame each portrait, as he calls them.

In this grouping, a “Portrait of an Industrialist,” “Novelist,” “Clairvoyant,” “Waterman,” “Neophyte" and “Apprentice" is each accorded his own carved niche-frame, all constructed of different types of low-fire earthenware or terra cotta clay with various stains. The lack of bright color echoes 19th-century black-and-white portrait photography such as daguerreotypes with their black splotches over solemn expressions.

We do not learn who the novelist in “Portrait of a Novelist” is, although he resembles florid Frenchman Honoré de Balzac. The wildly curly and unkempt shoulder-length hair could be a giveaway. There’s an irony in “Portrait of an Industrialist;” the stern blue-collar face with a cap seems anything but a captain of industry. “Portrait of a Clairvoyant” seems more religious fanatic à la abolitionist John Brown than any occult seer. Such depictions might be part of the 48-year-old artist’s imaginary world. Their conscious historicism, with the antiqued look and Victorian frame allusions, has its limits. Any individuality of facial features is neutralized by the generic presentation of color, size, and serial context, nor does there seem to be any evident symbolic link between the frames, their decorative motifs, and the attendant occupation of the figure.

The five new “Processionist” demi-torsos jut out nakedly from the walls bereft of any clothing or stagy framing devices. Similar to Metivier’s early work, they suggest he has not yet exhausted his project of honoring demeaned and degraded homeboys. Now they are older, drenched in black and brown stains that double as dripping blood, scarier and more powerful than before. The African-American man in “Processionist #14,” with buzzed haircut and battered, blood-spattered forehead, could be a victim in Ferguson, Missouri. These are speculative narratives that naturally emerge from the best of Metivier’s figures; the “Portraits” are quaint and illustrational by comparison.

It’s time to end the “Offspring” series of black raven heads mounted in groups on a wall. Not really installation art, the 47 bird heads read individually rather than forming a flock; and the tense, ecological references have long evaporated. Another attempt at installation art, “Symptomatic Likenesses,” 25 differently fired and glazed human brain surrogates, add spiky metal rods to some of the brains. At least this offers the artist, who was educated at California State University Long Beach (BFA, 1997) and the University of Washington (MFA, 2001), a chance to expand his palette. Blue, brown, red, yellow, and gray brains are laid out in a five-by-five-element grid.

This work and the “Processionists,” are welcome signs. Symbolic, socially rooted subject matter is the direction in which Metivier should continue. Nostalgic forays such as the “Portraits” only point up the theatricality to which he is easily susceptible. In lieu of multiple figure groups or the full-length figure, the embattled heads with their scratches and assaulted marks could not be timelier. Sadly, such references will probably remain urgent allusions in our troubled society.