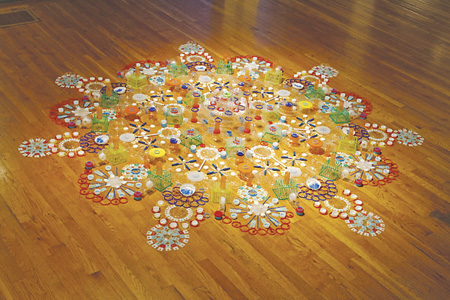 As in the drawings Inside Out, Floated In (both 2008) and Above and Below (2009), the artist’s curvy imagery is more Fallopian than phallic, with pastel hues that suggest paisley scarves, the uterine canal, and Victorian jewelry designs. More so than the installations, the drawings expose the fertile range of the artist’s image-making powers. Gabe Liked Jazz (2009), a highly ordered, circular floor installation, radiates plastic detritus like green-plastic strawberry baskets, plastic cups and clear, molded-plastic supermarket bakery covers. Domestic humdrum meets cheery, dressed-up consumer flash. Untitled (2009) is a shimmering blue, perforated plastic curtain that upon closer inspection is irregularly gridded. Islamic tiles come to mind as a source, but then, so do Target shower curtains. With soft lighting, it casts a blue haze. Adjacent is White Noise (2009), composed of hundreds more plastic bakery and deli food containers with the occasional remnant of a wrapper as chromatic accent. At ten by twenty feet, it announces a commanding front that soon collapses into a brittle cheesy presence. When Skubinna’s sources are stripped this bare, his transforming powers seem thinner, less acted upon in ways that enrich the other installations. The artist is still vacillating, however, between sculpture as mere arrangement or as intense, accretive outcome. The best works, such as Gabe Liked Jazz, tilt toward the latter.