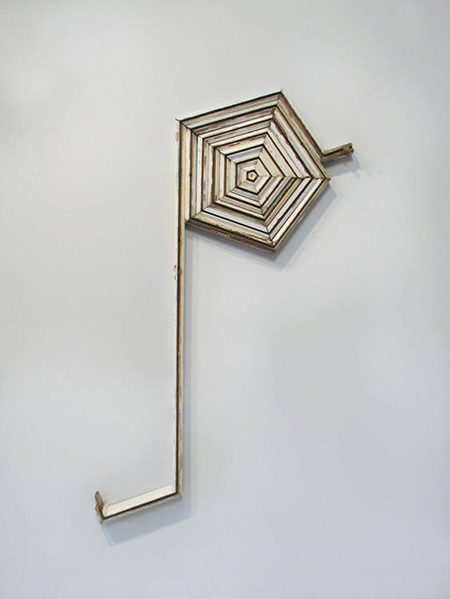 It’s been little over a decade since Evan Blackwell’s Seattle gallery debut at Sideshow. Since then, he’s explored a wide variety of expressions, including installation art and art in public places. His earliest ceramic pieces were seen widely in group shows in Chicago, Maine, Italy and China while his more recent cut-and-rearranged wood-and-metal scrap assemblages have also been shown in Cleveland and elsewhere.

It’s common, but often difficult, for ceramic artists to shift to other media and Blackwell is no exception. In order to do so, he has fastened upon abstract, geometric and modernist forms that are built up element by element with either dismantled housing construction materials, varieties of galvanized steel and metal hardware store sprockets or reordered saw blades. Mounted on the gallery walls, the accumulation of Fibonacci curve shapes, spirals, diamonds and pentagonal mazes suggest Frank Stella re-appearing as an urban folk artist.

All the content in Blackwell’s art rests on the viewer’s imagining the original location of the materials: someone’s old house, carpentry shop, sawmill, or, in a few cases, a desolate rural wasteland. Pinned to the wall like laboratory specimens, they resist any decorative appeal since they are largely colorless except for the source material’s own properties. “Frame-work” and “Windows” reorient into, respectively, a rough diamond of irregularly cut-and-reversed picture frames and similar black-lacquered frames cut up and set into 36 squares stacked like an American quilt. The different wood stains create an irregular pattern across the whole.

“Pyrrha,” “Odile,” “Spiral,” “Scarlet,” and “Margara” hark back to Blackwell’s 2012 show and remain among the most interesting shapes overall. These works proceed from the big (4 by 4 ft.) “Estelle,” a monumental pentagon with sectioned concentric wooden slats. However, complicating the composition more by connecting the graduated pentagons by diagonal lines generates some dynamic movement, largely missing elsewhere. Rather than the wall-hugging stability of the other works, these five emit some movement, climbing up or sliding down the wall at tilted angles. One other wooden work, “Development Fragments” is a long series of nine diamonds five feet wide.

More ambitious but still too dependent upon pattern and symmetry for its formal organization, the large metal pieces average five to 15 feet wide. “Silver Ledges Diamond 2” is quite minimal, like bands of steel fish scales in which the largest of five diamonds is centered with a quietly shimmering radiance. “Complex,” at 15 feet wide, pushes the industrial machine-parts idea to a logical, slightly sci-fi extreme. Successfully avoiding an overall symmetry, it proves how Blackwell need not always fall back on endlessly repeated shapes or easily available metal and wood building parts.

Similarly, the nine-part “Islands in the Sky” sets wooden “mountain ranges” on shelves that are rearranged on a wall in a way that resembles the San Juan Islands. Could it be that when Blackwell anchors an image in nature, or allows identifiable representation to work for him, as in the giant “Saw Tooth,” everything comes together?

Urban environments and how they change — and how they change us — are one approach to Blackwell. This is a large, impressive and fully sustained body of work. Now Blackwell needs to reconsider everything — materials, subjects, content, form — and move ahead to something even more arresting.