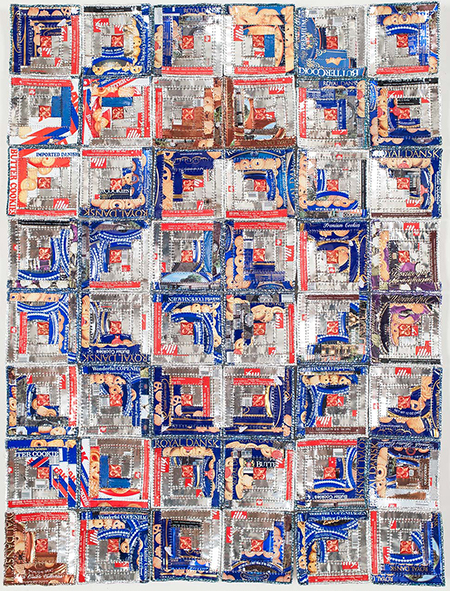 For example, gender, consumerism, junk food, road culture and war are among the variety of subjects alluded to in these large wall-hanging “quilts” that average five or six feet square. Because the American quilt is also a potential vehicle for storytelling as well as for genealogy, the iconic object acts as a narrative matrix for the artist, like a short story or novella. “Be Prepared” (2006-14) and the triptych “Tumbling Dice Quilt” (2014) juxtapose Cub Scout and Boy Scout merit badges with scraps of an Army-Navy surplus camouflage army uniform to make points about both the militarization of American youth and the ongoing controversy over gay scouts and scoutmasters. More dimensional than the other quilts, each alternating diamond is punctuated with a spent bullet.

Beyond the Pacific Northwest, Beecher’s art has been widely commented upon and exhibited in important gallery and museum surveys in New York, Texas, Oklahoma, and Illinois (Her New York City solo debut was in 1989). A retrospective was held at the Hallie Ford Museum of Art in Salem, Oregon in 2011.

Beecher’s strict formal control and rigid symmetry are the foundational skeleton of her art. However, within the quilt grids, all hell breaks loose: spirals, sunbursts, maze shapes, diamonds and circles all have their day as our apprehension of each piece reveals license plates, paint tubes, olive oil cans, aerosol paint cans and other cast-offs.

“Square License Plate Quilt” and “Large License Plate Quilt” (both 2014) are the largest works on view at, respectively, five feet square and five by eight feet. The former is a dazzling display of 50 state license plates cut and rearranged in a colorful manner with more toy cars in between. The latter uses the squares-within-squares motif of quiltmaking to create a large double-diamond pattern. A nod, both droll and commemorative to Jasper Johns and Joseph Albers comes to mind.

Beecher’s social criticism is wry and gentle. Blue-green metal containers for a “Peanuts” cartoon product alternate with found silver and tin to build a vertical composition of another double diamond. Cheap comics and the unending commercialization of American childhood are underneath this work, but only if one ponders it closely.

“Flower (Propeller) Quilt” (2014) and “My Palette” (2009) both posit a greater chromatic austerity and a more sculptural direction than other works here. Tiny metal propellers jut out from each hardware-store “blossom” in the former. The shape of a painter’s palette hints at an oblique self-portrait in the latter with flattened, spent and rearranged studio tools such as paint tubes and brushes squashed into another organizing grid.

As tight and controlled as they are, one wants Beecher to explode further, beyond the grid. Until then, these works have such substantial material presence that one cannot stop thinking over their implications. Once again, Beecher’s craft has carried her concepts.