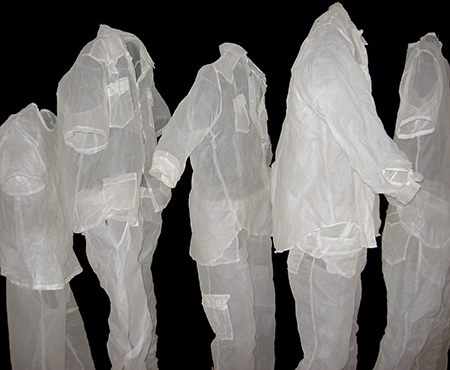 The issue of undocumented immigrants tends to put Arizona in an embarrassing spotlight, thanks to a history of questionable legislation, and Phoenix artists have not shied away from the politics of it all as subject matter. So along comes Sara Rockinger, a Colorado fiber artist, with an earnest thirst for knowledge about the issue and a multimedia installation that delivers a haunting image.

In a small, darkened gallery, Rockinger transforms various materials and methods — sheer fabric, stitching, lighting and video projection — into a statement on the faceless and nameless who walk among us, whether they be undocumented immigrants or those simply seeking a better life. Called “In/Visible,” the installation draws its power from about 30 floating figures created from white fabric, which appear ghostlike due to the translucence of the cloth and the placement of light. The upright but headless and footless apparitions form two tight clusters between which the viewer can walk, all the better to summon up empathy. Rough embroidery on one shirt lets the figure “speak,” with the words “I didn’t break the law. It broke.” For contrast, Rockinger adds a few figures made from utilitarian clothing such as faded jeans and T-shirts.

The integration of video footage is realized through projections onto a few of the white shirts, gauzy enough that it is hard to determine what the video is depicting, although the sense is that these are migrants at work or at the border crossing. Another video component is the small screen against a wall, where Rockinger has looped short interviews with various Arizonans. Collaborator Mark Conkle, also from Colorado, shot the video, as Rockinger asked a cross-section of residents about their ethnic heritage, what brought them to Arizona, and their experiences growing up in the state. Included in the conversation, of course, is the notorious Senate Bill 1070, which allows law enforcement officers to stop individuals and ask them to show their papers. In one segment, a Latino man talks about leaving violence behind him and bringing his family to a safer place. A snowbird from Canada chats about the ease of seasonally changing homes. A woman of Korean heritage who came to Arizona through adoption says, “I don’t think anyone here is quote-unquote racist ... (But) please do it the way everyone else has been doing it forever, and wait your turn.”

Although it is harder to assess Rockinger’s purpose in including the interviews — and perhaps they are not needed — they do demonstrate her wanting to ground herself in the subject as she created the installation. Certainly, they reinforce the point that we are a nation of migrants from various eras in history.

Rockinger has stated that, as a fiber artist, she wants her figurative work to be socially relevant and that with this particular piece, she wanted to “challenge boundaries between the notion of ‘us’ and ‘them.’ “ Tellingly, she does that through the simplest of materials and in the midst of a place where the conversation about immigration is vital.