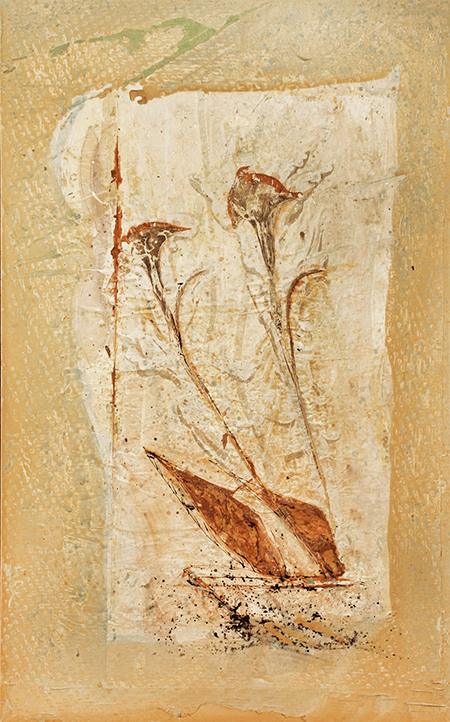 If the art-as-philosophy idea elucidated by the late Arthur Danto initially seemed a bit odd (Andy Warhol as sage?), in recent years it became, with the proliferation of conceptualism and Gallic postmodernist theory, a cliché. You could not see some artwork except as demonstrations that someone had gone to the right sort of art school; footnoted to a fare-the-well, such embodiments or reifications of theory spawned a new academicism, galling almost enough to make one long for the pre-Duchampian days when 'bête comme un peintre' ('as stupid as a painter') was a common phrase.

Painting need not be either stupid or pedantic, however, as the new body of work by Martin Facey proves. A student at UCLA with such diverse artists to learn from as William Brice, Richard Diebenkorn, Charles Garabedian, Robert Heineken,  Llyn Foulkes, R.B. Kitaj, Lee Mullican and Ed Ruscha, and a teacher himself, primarily at the University of New Mexico, Facey, now retired and returned to Southern California, is obviously up to date with the many varieties of artistic expression operant nowadays, but has stuck with the old-school religion of modernist abstraction. This is probably in some part due to its spiritual and philosophic aspirations, once central to its revolutionary mission, but now buried under generations of formalist theory.

Facey, whose previous work looks thoroughly contemporary, explores what might be called Romantic pantheism. He writes, “Painting is a spiritual-philosophical inquiry, finally.” “The Trees” is a series of thirty-odd works completed over the past two years that finds Facey exploring a new direction from previous bodies of work (named after monoliths, maps, vessels, seeds and cells). The current exhibition of twenty of these is entitled “Excavations: Patterns in Time,” nicely characterizing the botanical-geologic vibe of these richly textured mixed-media works in earthy palettes of umbers, blacks, grays, and subdued reds and yellows that are constructed backwards, like sedimentary depositions, with the topmost layer done first, followed by succeeding layers of pigmented acrylic medium and collaged objects: flowers, leaves, bark, wire, nails, and even Simplicity sewing patterns for homemade garments, replete with cut lines (reminiscent of, say deKooning and Marca-Relli), instructions and labels. A layer of fabric, serving as structural base, is then added, with the whole mounted to a wooden frame.

Says Facey: “I use rust and decaying plant materials as my primary drafting devices, thus promoting real physical change as both the ‘content’ of these large images, as well as their process of discovery.” Gallerist Paul Mahder refers to works like “Apricot,” “Dogwoods,” Grand Canyon” and others as ‘alluvial.’ This reversed working method might seem gimmicky — in the visually undiscerning postmodern age, the gimmicky back-story is endemic — but Facey’s forty-year practice enables him to create both rich visual experiences, with seemingly accidental forms and colors emerging from and subsiding into his richly textured matrices, and coherent visual poems. They’re moments of arrested metamorphosis — except that they’re not fixed; they change. They’re painterly paradoxes, seemingly ancient relics dug up from some ancient civilization, or fossilized remains with their delicate structures perfectly preserved for millions of years between layers of mud that hardened into shale or limestone. They speak urgently to social, economic and environmental issues.

The artist has described the central motif in these paintings, a symbol or hieroglyph for natural (and human) growth and change: “Tree. ‘Y,’ Divining rod. Fork. Primal figure. A bifurcating trunk spreading into two branches. This form has remained a constant motif for decades. Signifying growth from roots to eventual ‘fruit,’ the ‘Y’ motif suggests cloning, self-replication, left vs. right, man vs. woman, organic vs. rectilinear, and above all: order and chaos.” Facey’s bifurcated form suggests not only plants, but also we bipedal forked animals. His images recall Asian painting in their calligraphy. They combine intimate and cosmic viewpoints. Roman wall painting is evoked in their delicate lyricism. Ideas of civilizational synthesis, compromise and change inhere within them. The plant-figure forms, mythic pictorial surrogates for the viewer, bend and do not break; we are just eventual carbon smudges. Facey once more: “Excavation is about discovery — or perhaps ‘recovery’ — a reminder of ancient wisdoms, long-buried and now unearthed.”