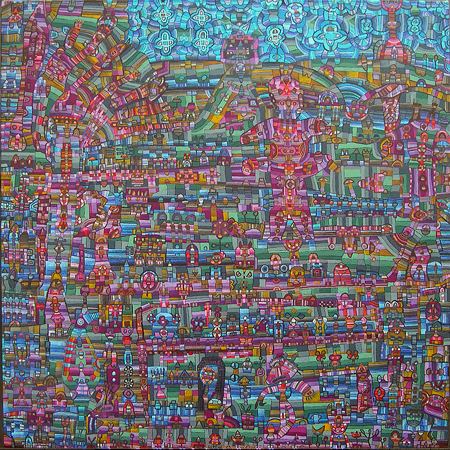 C. L. Utley’s recent work affirms his unique position in Pacific Northwest art. Playful and mysterious, his paintings reveal worlds with completely persuasive yet wildly irrational images. Utley at 59 corresponds to many contemporary trends: neo-ethnicity, globalism, encoded systems. But it’s also impossible to overlook — if only briefly — his place in the area’s longer cultural history along with influences those early childhood experiences had on his art.

When Mark Tobey is your babysitter and modern art dealer Zoe Dusanne [see Kangas' Editors' Roundtable of February 14, http://www.visualartsource.com/index.php?page=editorial&pcID=17&aID=2094 - Ed.] begs you to become a trapeze artist, it’s difficult not to let the anecdote occlude the achievement, but Utley has delivered his own satoris, those signature Northwest School moments of transcendence. The son of a wealthy globe-trotting couple, Josephine and Windsor Utley (the Gerald and Sara Murphy of Seattle in the 1950s), their son was born in Canada, raised in Fiesole, Italy by them and lived with them sporadically in a stone palace designed by his father on Salt Spring Island, BC, “Windsor’s Castle.” Add in stretches in Paris, London and even Laguna Beach for a polyglot childhood and adolescence.

A private student of Tobey’s, Windsor Utley was delighted when the boy expressed interest in looking at and making art. Tobey concurred; and noted how children’s art could influence adults. Look at Paul Klee and his son! Young Claude was encouraged.

Eventually educated in Seattle and at various California prep schools, the teenager gravitated back to Vancouver Island, where he attended Victoria College of Art under the guidance of Jack Wise and James Gordanier. Young C. L. synthesized all their wisdom with the mystical wispiness of his father’s Tobey cohort, along with touches of the many postwar European artists he met in Victoria and Vancouver, including Herbert Siebner and Flemming Jorgenson. Evocations of childhood in modern art could go a long way.

Beside his bi-national and glamorously peripatetic childhood, however, C. L. Utley managed to develop his own unmistakable style — or, more to the point, styles. Alternately dark and colorful, figurative, narrative and iconic, his often quite small acrylic canvases convey deep, ambiguous backgrounds and ominously foggy spaces. Father’s shadow is evident in a few of the smaller, beautifully blurry acrylics such as “Autumn Burlesque,”  “Modern Times” (both 2009) and “Northwest Paintings” (2011). Two other Tobey protégé-satellites, Helmi Juvonen and Leo Kenney, pop up as inspirations in “A Perfect Storm” (2005) and “Procession” (2007). These works and others, including “Night Music” (2007) and “Ecco” (2011) reinforce the darker, twilit side of the Northwest School. Filial obligation is more than repaid by the observant child become adult painter.

Had Utley stayed solely in that vein, the brooding unconscious of the meditated outdoor mind, this story would not have a happy ending. Fortunately, he became a great colorist in the process of assimilating all the darkness, though one always tempered by strategies of dislocated chromatic harmonies and indecipherable systems. “The Game” (2008), “Configuration” and “The Situation” (both 2014) suspend any organizing grids in favor of pure floating and interacting color passages, all cohering into vaguely figurative profiles. Here and in “Five Figures” (2013 — a mere four by five inches), Klee and Joan Miro drop in for Utley’s larcenous benediction. Like them, the formerly precocious child-artist successfully retains the spontaneous, unfettered look of youth, but always with the knowing sophistication of a mature colorist.

The more brightly colored paintings breathe rather than pulse, as in “At the Place” (2011), with its neighboring pinks, oranges, and pale blues. “Beach Party” (2013) drenches a stylized seaside family with oranges and reds diffusing the sandy shore. A few larger works confirm Utley’s ease with any scale. I am drawn to “The Landing” (2013), “Sacred Realm in Red” (2011) and “Charon’s Escape” (2012 (averaging two by three feet). Reminiscent of the late Alden Mason’s final, frantically peopled landscapes, Utley has never shut the door to friendly ghosts, but rather welcomed them in.

Without revisiting Hamlet’s father’s ghost, Utley is reaching new heights, inventing pictorial fields that are dense with enigmatic imagery, all the better to unravel an ecstasy of oscillating, flickering color.