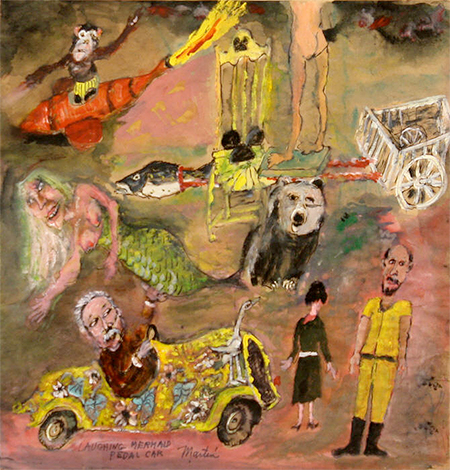 For his 16th solo show here since 1987, 85-year-old artist James Martin somehow manages to continue growing without changing much of anything. Long considered an artist’s artist and the subject of an admiring monograph by critic Sheila Farr in 2001, Martiin has been a tough nut to crack for many another critic (including this one). A love-him or hate-him kind of artist, Martin's approach now seems more timely than ever, as contemporary art obliterates divisions between high and low culture. He merges low comics and cartoons with high execution, atypical composition and painterly effect.

Uniformly sized at about one-by-two feet each, painted on brown wrapping paper, and peopled by figures, characters and caricatures from a 50-year repertoire, the new work will be a revelation to those unfamiliar with his witty, improbable scenes and tone, repetitive themes and fantasy narratives or a confirmation for those who find in it all too narrow a subject, and who may agree with former “Seattle Times” art critic Tom Robbins, who commented on Martin’s colors as “stiflingly monotonous in value relationships.”

Actually, the bright colors in the 26 new gouaches on paper look startlingly fresh. The people, including numerous self-portraits, may be a limited cast, like recurring characters in a Philip Roth or John Updike trilogy, but, when viewed all at once, or one at a time in any order, they take on the serious depth of a good short story. I shall leave symbolic and allegorical readings of Martin’s comic-book iconography (see British artists Hogarth and Rowlandson) to more literary admirers.

Despite their being based on real people, including beloved favorites like Andy Warhol, van Gogh, Morris Graves and Truman Capote, as well as personal friends, I shall also resist unraveling any autobiography. Instead, the viewer may free-associate stories, as in the modernist fiction and poetry of Gertrude Stein, e. e. cummings, and Flannery O’Connor.

Working this spontaneously with nary a touch of correction or revision, some paintings fare better than others. However, that leaves plenty to like, including a few where one bursts out laughing at either a scene’s implausibility (flying elephants in "Pedal Car, Laughing Mermaid") or its nonstop, zany pace, as in “Artist’s Delight” and “Laughing Mermaid Pedal Car.”

Taking the long view, Martin has never equaled the sparkle, fluidity and convincing insanity of the works acquired under the patronage of the great transplanted European connoisseur collector Manfred Selig and his property developer son Martin Selig in the 1960s and 1970s. More intimist or visual diarist, Martin now compresses all the devices of the past into smaller formats, with some loss of power, including the power to shock or outrage. Cuddly, crusty and endearing, the best of the new paintings are also the funniest — and largest. This is the nature of growing without changing much.

“Fiddles on the Roof” and “George Away, The Mirror” compare circus performers with a take-off on Emanuel Leutze’s 1851 “Washington Crossing the Delaware.” “Searching for Lost Furniture” ridicules a tuxedoed art collector in another boat futilely seeking sunken antiques. Elsewhere, Picasso joins monkeys, sailors, alligators, cowboys and gondolas, all part of the artist’s wacky world. This cynical, willfully superficial stance is part of the artist’s love-it or leave-it mentality. Compared to Martin, the great joker of Northwest art, even James Thurber had his profound side. Hieronymus Bosch also comes to mind, but without the sexual license or terrors of hell. Martin’s world is more limbo than hell: perpetually caught in a vice of manic activity and cloudy, occasionally flashy glimpses of the foolish circumstances of humanity.