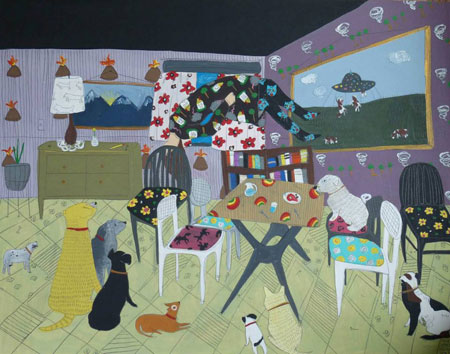 Andrea Heimer, ''Goldie Bracket Claimed Strange Things Happened To Her During Every Full Moon And Sometimes On Thanksgiving But She Was Kind Of A Liar So My Parents Said It Was Probably Just Wishful Thinking,'' 2013, acrylic/pencil on wood, 11 x 14".

What is the thin line between fine art and outsider or folk art? Most art critics don’t want to go there, but Andrea Heimer’s show since her 2008 debut at Blue Bottle suggests that she may be among those artists who cross over quite easily from her early venues (“tattoo shops, salons, coffee shops, and sidewalk sales”) to the white cube space. Think Henri Rousseau, Ralph Fasanella, Morris Hirschfield and Florine Stettheimer, all of whom had little training but made up for it with big, wonderful ideas. As far as writers go, Flannery O’Connor, Don DeLillo, Shirley Jackson and ex-Seattle-ite Lynda Barry are forerunners of the kind of satirical demolishing of scary suburbia that is Heimer's specialty.

Much of the enjoyment of Heimer’s “Suburban Manias” comes from the successively horrifying reaction one has upon scrutinizing her small-scale acrylics, weighing in at from 11 x 14 inches with none larger than 36 x 48 inches. What at first appears as a colorful Saturday morning idyll of lawn mowing and car washing swiftly degenerates into gruesomely violent pictures of mass murder and dismemberment. Yet these are, bear with me, hysterically funny.

Cheery and creepy, satirical and savage, outdoor and indoor, multiple-figure vignettes chronicle death by automobile, crucified scarecrows, a lonely male exhibitionist, and well-liked neighbors engaging in kinky sex. Heimer lives in the small border town of Ferndale, Washington, not that far from Lynden, WA, the fundamentalist hellhole that banned dancing and served as one of the models for the film “Footloose.” Educated in Great Falls, Montana, she has been invited to group shows in folk-art-only galleries in New Jersey and Texas, but was also contacted for an important group show at the Charlottenburg Kunsthal in Copenhagen, Denmark.

It’s easy to grasp the wide appeal of her work despite its raunchy, vicious imagery. Ridiculing complacent suburban neighbors is second nature to Heimer, whose titles border on entire short stories. “Mr. & Mrs. Jones Were Easily The Most Well-to-do People in the Neighborhood But There Was a History of Violence Between Them” illustrates an antic duel in fencing attire. Elsewhere, space debris inconveniently falls into people’s backyard barbecues; annual summer garage sales become excuses for appalling carnage; and children rebel against mothers who all read the same book about eliminating sugar from their kids’ diets. Besides the ubiquitous Joneses, the Joyners and Millers are also noted in extremis, caught with far more than their pants down.

Heimer’s paintings are like gleaming Hindu miniatures rather than thrift-shop art. Her jewel-like colors and crisp patterning allow for densely packed compositions that recall an earlier, equally problematic Northwest artist, Michael Lawson. The Englishman lived in Seattle in the 1960s, worked in enamels and acrylics, and drew widely upon British tabloid political cartoonists with a focus on the garish vulgarity of American consumer culture. Like Lawson (who sadly went insane and returned to the UK), Heimer’s ingenious combination of brilliantly elegant color, quickly readable drawing and enormous reservoirs of anger and contempt toward her subjects makes for an unsettling, but riveting, experience.

Two large, absurd sculptures round out this dazzling survey. “Mrs. Miller Believed She Was Allergic To Everything ...“ is a seated mannequin in a face mask (like many of the figures in the paintings) draped in knit afghans. More abstract, topped with a snarling painted papier-mâché animal head, “The Childabeast ...“ reinforces the toxic hilarity of the other works.

Andrea Heimer’s outsider vision is under control for the time being, expressed with artistic power and that undercurrent of bubbling rage. However, because her rage is channeled through humor, the vision is bearable to the viewer and, one hopes, sustainable for the artist.