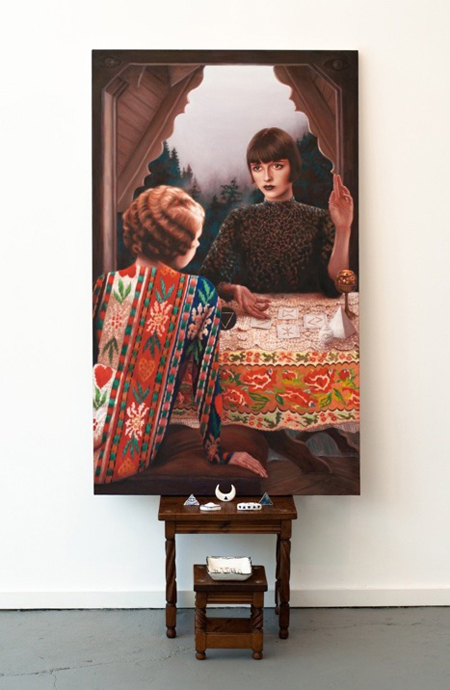 That Alison Blickle’s new paintings, titled "History of Magic Part 1 … The Hermitage," with their scantily clad young things, are surely subject to feminist critique is inevitable, despite the perfunctory narrative subtext that surrounds them. The title of the show comes from Eliphas Levi’s occultist book of the late 19th century, which combines the mystical lore of various cultures with Christian symbolism. The great upsurge in mysticism at the time, paralleling our own New Age, took, in art, the forms of Symbolism and abstraction.

The spirit of these period styles translate into Blickle’s flapper-era sirens adorned either in skin-tight printed silks or in body paint. Their poses derive from Pre-Raphaelite maidens, Art Deco lamps, and Jazz Age nude photography; the patterning comes from Art Nouveau and Constructivism. States Blickle: "My paintings let me live out fantasies through characters I create ... and feel a connection to something bigger than myself: to nature, to my ancestors, or to a sense of spirituality. I’ve created an alter ego [who is] ... a strong, fearless hero engaged in exploration and adventures. My work touches on the conflict between my attraction to mystical tradition, and my skepticism of it.”

The seven paintings the comprise this show, which are accompanied by glazed porcelain vessels and wall pieces bearing runes and enneagrams, are the first of a series of works depicting the artist’s spiritual quest in mythic terms: “the tale of a mystic who lives alone in the woods and sets out on a journey to create a mysterious object that will change the world.” In "Hand of the Philosopher" two women, one with marcelled hair the other in a Louise Brooks bob, read their fortunes in cards while seated next to a window overlooking a fog-shrouded forest. In "Devotional and Compass," young body-painted women kneel, receiving or having received revelations from the occult objects held in their laps. "In Blue Room" and "The Visitor," the patterning on the women’s bodies all but camouflages them within the lushly decorated interiors. "In Perpetual Discontent," a young woman, nude but for a coat of fallen leaves, kneels beside an artifact set on a small draped table. She covers her eyes, wielding a paintbrush in one hand, thus seeing through art rather then normal sight. In "The Hermitage," two vamps in patterned body suits, a blonde and a redhead, wave at each other across a room wallpapered in Gothic paisley. As Levi termed it, we are immersed in “sense-attraction” to “the daughters of earth.”

Younger female critics have judged these semi-nudes as expressions of female empowerment. But older gazers like myself, perhaps having been ideologically shaped decades ago, can’t accept that, however conflicted between attraction and skepticism the artist says she is. Blickle’s previous style, less naturalistic and sensuous than it is here, evolved neutrally from cartooning and expressionism. Those seemed to me more amenable to depicting her declared search for psychic balance and oneness. Others may be more open than I to to validate this current mix of eroticism with retro fashion.