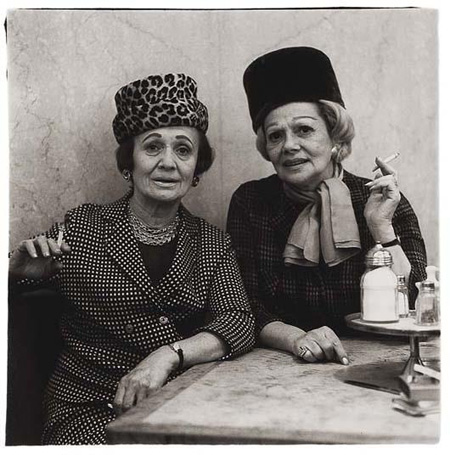 Those with preconceived notions about the photographs of Diane Arbus may be surprised to reconnect with them in different ways. Changing societal mores, for instance, are beginning to make diversity a more readily accepted norm. Although each of her photographs is evocative of individuality or striking unconventionality, together they may now represent the characteristics of a society that is learning to accept rather than scorn diversity. What were heretofore considered stereotypes, or objects of ridicule, are coming to be viewed more as subjects of interest. On the other hand, photographs taken in the 1960s can appear as period pieces. Outlandish hairdos, for instance, though viewed as normal at the time, may seem ridiculous now. Thus the context of our time lessens the shock that was originally Arbus' aesthetic stock in trade.

Arbus’ against-the-grain notions of sleek photographic representations still have the ability to jar, and her selection of subjects reveals much about her. She explores the nature of identity, questioning the characteristics of normality while at the same time celebrating life’s myriad forms. We are forced to question conventional ideas of beauty and ugliness, particularly in changing times. What constitutes living on the edge and what is acceptable in society? Who is considered deviant or marginal? Her photographs are collaborations between photographer, subject and viewer. If the idea is to view her subjects as anomalies, then we cannot ignore the photographer as exploiter. Circus performers, hermaphrodites, transvestites, dwarfs, nudists or cultists represent people we are not likely to encounter in our everyday lives. Though these subjects may have been selected for shock value, and poses are often formal, they nevertheless feel distinctively personal, which adds up to an air of timelessness.

Arbus often captures extraordinary people in ordinary circumstances, such as the young girls with Down syndrome who happily cavort. At the same time, she endows the ordinary with a special patina. The glamorous woman who strikes a provocative pose, the two finely dressed women who dine at an automat, the man and woman who eat hot dogs in the street and the socialite posing on her fancy couch are but some examples. With only a few exceptions here, such as some of the circus people and transvestites, the visions no longer align with Susan Sontag's "freak show" personification, particularly in light of decades of activity by Arbus' numerous aesthetic offspring. Furthermore, routine exposure to slick commercial representations of nude bodies in recent decades actually render her photos of real bodies at nudist colonies somewhat comforting. They turn out, ironically enough, to remind us more of ourselves.

Her subject’s confrontational stares can be unsettling, but they generally appear to be at ease with their individual personas. In fact Arbus deftly manages to convey that subjects see themselves as ordinary members of society. This may be due to the fact that she invested time to making these people feel at ease with her, and she often photographed them within the confines of their personal environments and intimate spaces, such as living rooms and bedrooms. It heightens our sense of familiarity, making it difficult to disdain what we may consider their incongruities. If at bottom, these people inhabit spaces similar to ours, how can we feel superior? The effect of time has altered Arbus' aesthetic from a parade of the bizarre to an empathic record of the full breadth of humanity.