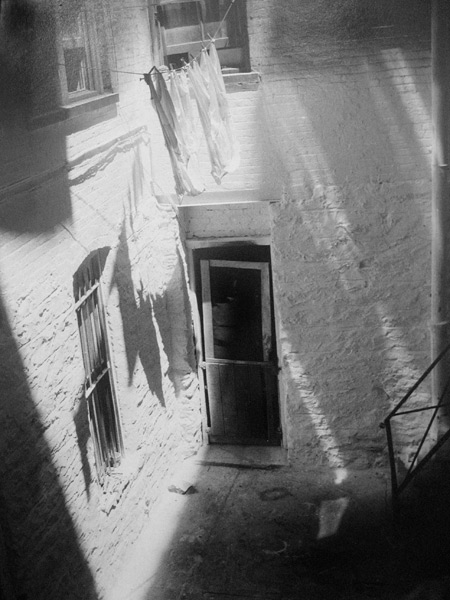 “Clotheslines,” photographs of John Albok, are rife with uncommon sensitivity. They provide details of life in a time and place that’s historically significant — specifically New York during and following the Great Depression. The artist took up residence in the city in 1921 and relentlessly documented it for decades. Albok left his native Hungary (later the Ukraine) and reached America after arriving at Ellis Island with a bag containing “scissors and a photograph machine.”

Albok used the former to earn a living and the latter to create stirring images of a place he grew to love. To paraphrase the author James Agee, the camera can be used to “develop our ability to see.” Albok manages to do exactly that, honing our vision when we witness the images he framed. They offer a shortcut into details of life on the streets when people had no work, no food and, one can surmise, even less hope. Albok, however, was more fortunate than most. He worked as a tailor in a shop at 96th and Madison Avenue and occupied an upstairs apartment at the same location with his wife and daughter. While many were unable to put together even basic necessities to survive — including permanent shelter — Albok worked at his business relentlessly and pursued photography with equal tenacity.

He captured the lined and worn faces of homeless men and women, the uproar of crucial social movements — and the most terrifically delicate and shaded aspects of light, leaves and snow, water and blooms. However, he inevitably returned to his “backyard” for shadows, lines and, of course, the shape of clotheslines. They’re actually quite fascinating. Clotheslines drape; they connect; they’re metaphorically brilliant. They become tropes for connection, communion and the humble marvels of daily human life in an urbanscape. For instance, “Untitled, New York, 1930” focuses our attention on a lank dress hanging ghostlike between buildings. It’s strung up, disembodied and discarnate. It seems the perfect dopplegänger for its absent owner. Does she wear it with heels and go to work, or out on a date? Perhaps it's simply trapped in time, an existential waif without heft or passion.

Albok summons his neighborhood — markets touting shrimp and freshly killed chickens for sale; kissing lovers wrapped in an embrace; children and adults cooling down in water spraying from a hydrant. But always, always, he returns to his own backyard — literally. “Backyard of John Albok’s Residence, 1932,” is exactly that. It’s an image of a stone structure, a screen door and, yes, hanging clothing. It’s almost impossible to describe what makes it so hugely celebratory of human existence. It’s gorgeously lit and framed by slanting and mildly haunting edges, darkened with shadow and shade. The work becomes emblematic of the loveliness that constellates our daily, tiny world. His genius lies in the ways he shows us the mammoth beauty that perpetually surrounds us.

Actually, Albok emerges as a pilgrim of sorts, a man who came from Hungary and documented his life in a New World. However, it’s far too facile to see his work as a series of documents. Rather, they’re treasures. They speak far more about him and his sense of deep aesthetics than they do about sociological moments. By this I mean they’re far more thrilling than images that are merely technically fine and historically interesting.

Explore each and every work. Then see what is in your own backyard, your own neighborhood. No need to get a camera but just look. This show is a great place to learn how to do exactly that. After all, Agee was right. We can learn much from photography — and even more from Albok. If we’re rightly attuned to it, he sparks a splendid adventure for us all.