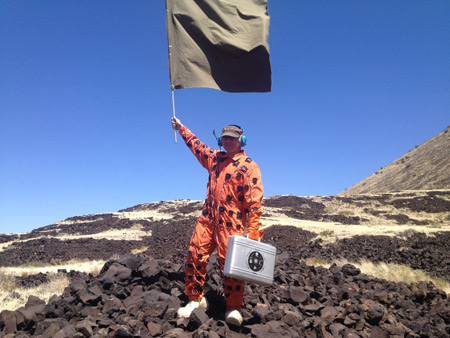 The multimedia exhibition “Trajectory: Miguel Palma” is at first take suffused with romantic and lighthearted notions about the desert. Palma, who hails from Portugal, lived in Phoenix for several weeks as part of the International Residency Program allied with Desert Initiative and Arizona State University. A spirit of adventure imbued his tenure here, as can be seen in his heat-laden road trip to a remote area of Arizona in a converted military truck. His mission: to plant a khaki flag on a hill strewn with lava rocks. Along the way, he fashions an orange jumpsuit with tiny fans (crude circuitry courtesy of Radio Shack), decorates his truck with the Desert Initiative insignia, and dons heavy boots and traffic-controller-style headphones. At one point, he even gets to drive a robotic vehicle designed for extraterrestrial exploration.

It’s all documented in a 20-minute video that should be the first stopping point when viewing “Trajectory.” From there, though, Palma’s playfulness evolves — if not into critiques of desert life, then into questions, particularly about issues such as urban development, mining, water conservation and military use of barren land.

The messages should be somewhat sobering to Arizonans as the state winds up its Centennial year. Palma has his say about that milestone, with an exhibit of drawings suitably numbering 100. The topics range from the Grand Canyon, to swimming pools, to the fact that Jackson Pollock lived near the Phoenix airport for a time — a variety of impressions that any desert newcomer might gather. Many of the drawings include cutouts from old Arizona Highways magazines and Palma’s handwritten captions. For instance, in one whimsical drawing a long pencil line whirls around the magazine image of a book of historic Phoenix photos, and Palma writes “haboob.” The more serious “Risks to Drinking Water” focuses on an old magazine image of two men in a fishing boat surrounded by Palma’s messages about fracking and groundwater leaks.

Water is also the subject of “Bypass,” a sculpture inspired by Palma’s happening upon an old tangle of tree roots. Emanating from that cluster are PVC pipes and tubing, Palma’s way of reflecting on how desert dwellers wring water from such arid land ... A bucket catches the slow drips of recirculating water.

The installation “Erosion” raises questions about mining practices. Palma creates a simple setup involving a Plexiglas cylinder and a power drill. While the cylinder rotates, the drill breaks down the volcanic rocks inside so violently that gray dust accumulates nearby.

Why is the show titled “Trajectory”? Not only does the word carry aeronautical and space travel connotations, but, as labeling in the exhibition explains, it also describes the upsurge in global conversations on sustainability in desert communities. In addition, it asserts Palma's growing stature in the art world, considered by many to be at the forefront of contemporary artist in Western Europe.

Wisely, the museum includes two earlier Palma works that help reinforce the artist’s often sardonic stance. One is “Action Plan” (2009), a 5-foot-wide board displaying military action figures and their accessories in comical abundance. The other is the installation “In Image We Trust” (2010), a mesmerizing tableaux of toys, dolls, photos and doodads that slowly rotates at the viewer’s eye level. Meanwhile, a video camera mounted near the top of the carousel feeds close-up images of the objects to a screen in another part of the museum.

Palma, despite the way he might gently poke fun at himself as a stranger in a strange land, has a lot on his mind. This temporary engagement with the desert — with all its harsh beauty and meaty issues — might just well reverberate in Palma’s future explorations.