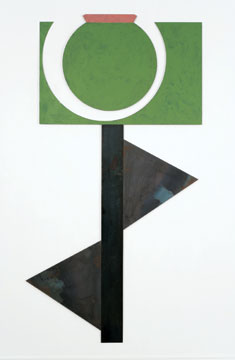 For her twelfth solo show at Traver Gallery since 1987, Merrill Wagner followed a traveling solo exhibition organized by William Paterson College of New Jersey with seven large painted-steel pieces and eight smaller works on steel, marble and brick. Dividing her time between New York and Tacoma, WA, since 1980, Wagner concentrates on recycled building materials and geometric imagery. On the one hand, she is a New Yorker with a fondness for rough street-found materials and Minimalism (the rise of which she witnessed first-hand); on the other, she uses natural imagery related to landscape compositions and colors of forests, rivers, and beaches. Unique and under-recognized in both cities, Wagner startled many Seattle viewers with a decisive shift in the new work toward representation: not only landscape “horizons,” as in Shore (2008), but actual, identifiable blueberries, thistles, flowers, bean plants and lakes.

The Traver grouping successfully brought together both strains—representation and abstraction—for the first time, perhaps foretelling a fruitful new late period for this artist who once seemed a dedicated non-objective artist to many. Shore, Structure, Pollinators #1-3, and Two Brands of Naples Yellow on Marble (all 2008) defend familiar Wagner territory: severe lines; obsession with varying shades of the same color; and no recourse at all to recognizable subjects. By contrast, White Hyacinth (2006), Wild Strawberries (2007), and Yellow Beans (2008) set painted scrap-metal parts into compositions mounted on the wall with magnets. The results are tall and elegant, helped by the titles.

Most shocking (and amusing) is Large Flower, Small Owl (2006) with its two punctured holes for bird eyes in a vertical piece of steel at the top. The opposite of Morris Graves, who once tried to become an abstract artist (with limited success), so it may be that Wagner is foraging in the forest of her own imagination in search of more creepy critters to follow.