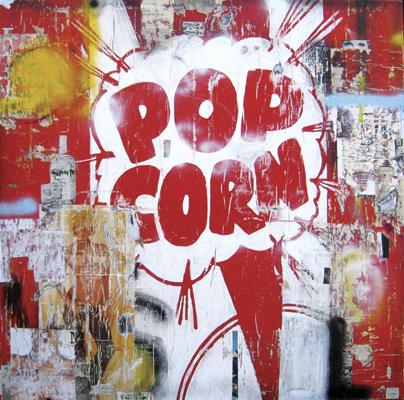 For Greg Miller the city of Los Angeles is a subject and a verb. While pages from spaghetti Westerns literally frame the perimeter of each panel, Miller actively seeks out artifacts of popular culture that recall consumer advertisements, femmes fatales, drive-in movies, surf culture, and even juxtaposes Elvis Presley’s early appearance on the Ed Sullivan show with a burning crucifix with text that reads “What is American?” Although the latent subject of “Recent Work” is fixation on popular culture, Miller infects his viewers with an undeniable nostalgia for a time that many of us have never known but have only grown familiar with through reproduced imagery. It seems that for Miller Los Angeles is city built upon pure illusion and chance, and is an endless source of inspiration.

Each panel in “Recent Work” is covered in a thick coat of resin that makes the oil paint shine as if being seen through a Technicolor prism. The glossy veneer also establishes a distance between the Angeleno-inspired images and the viewer, as if Miller is reminding us about the visual culture of Los Angeles that exists outside the gallery walls. Image is everything but it cannot always be penetrated. Hollywood marks the appearance of the first femme fatale, painted in black and white. She appears to us in profile with her lush lips pursed; her right eye, which is richly covered in make-up, deflects our gaze. She is at once arresting and mysterious. Above her, painted in thick handwriting, is the word “Hollywood,” as if written on a bathroom mirror with a tube of lipstick. Does this femme fatale personify Hollywood for Miller? Much like the woman who appears in Trophy Room, whose face is imprisoned by Venetian blinds and never acknowledges the viewer’s presence, Hollywood is a mere flirtation that only exists in letters strewn across a hill.

Although Miller’s work employs collage, his panels are constructed by a technique called décollage where the image is created by cutting, tearing or otherwise removing pieces of an original image. Popcorn looks like a lacerated poster where one poster has been placed over another, and others beneath that, and once the top layer is ripped off it reveals a greater or lesser degree of the posters underneath. A small portion of text in Popcorn reads, “neither here nor there is everywhere,” and it seems a perfection summation of Miller’s work that combines torn pages of books, decaying advertisements for women’s garments, comic books, and religious imagery.