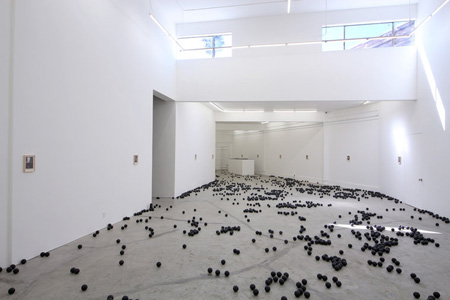 Lutz Bacher once again presents a disparate inventory of objects — a looping audio track, black balls, framed book pages, a framed poster — that share an internal logic just as surely as they don’t make any sense together. And that is exactly why Bacher’s work is notable and unforgettable; it’s just odd enough, intriguing enough, and strangely intuitive enough to catch and hold your attention without ever being obvious or clichéd. One thing it’s not is straightforward.

A recent feature on Bacher in Art in America aptly summed up in its first sentence how I believe most people, myself included, might first feel when encountering his work: “How are we supposed to view the work of Lutz Bacher?”

For this show, there are certainly some obvious ties that begin to emerge. Small black balls are randomly strewn throughout the gallery, on the floor, creating a vision that isn’t so unlike the reverse of looking into the night sky. The main gallery features 9-by-6-inch framed pages from a book called "The Celestial Handbook," which features images of stars and other outer-space features. The balls thus play off of the matter in the images of the book, creating an interesting space reversal: the small images of the most vast space juxtaposes against the immediate large space of the gallery (which, of course, is infinitesimally small compared to what’s depicted in the pictures) filled with the stars/balls.

The side room of the gallery features, in addition to more black balls, a black Plexiglas-framed poster of the vampire character Edward Cullen from the “Twilight” series. The black-on-black image is barely visible, especially in the low lighting of the gallery room. A haunting, heavy audio loop plays in this room. The feeling is, well, otherworldly (as are vampires).

The heaviness of space and eeriness of things vampire is lightened by the presence of the balls, which lend a sense of fun, playfulness and ambiguous permission. Can you kick them? Throw them? Should you step around them? Will they bounce? The reference to the pop culture's “Twilight,” originally a series of novels written for teens, further lightens the mood.

All said, what’s best about a Bacher show is that it provides an experience; not unlike a good, richly layered book, her work inspires multiple moods and emotions and compels questioning and contemplation, with a hint of dose of fun. So, how are we supposed to view the work of Lutz Bacher? We aren’t; we’re supposed to fully experience it, with our eyes and ears open, our intuitive senses primed, and our imagination fully engaged.