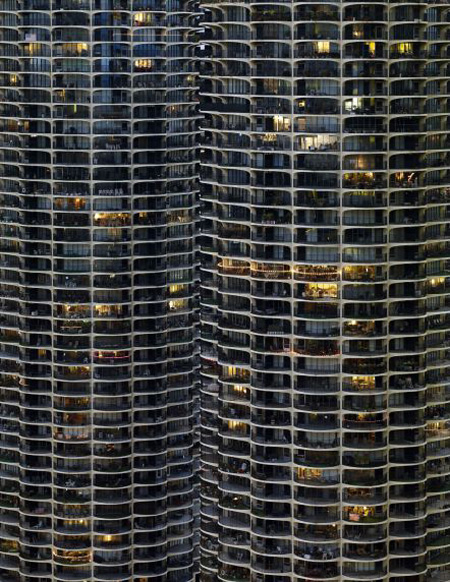 Simultaneously at the entrance and exit to “Skyscrapers: Art and Architecture Against Gravity” sits Tony Tasset’s bright orange girder entitled "i-beam." As you enter, "i-beam" is unassumingly installed on the floor, rather quiet in its minimalist presentation - like raw material or a clean slate yet to be filled. “Skyscrapers” occupies the museum’s entire third floor with a mix of historical pieces, contemporary works and a healthy dose of Chicago artists. All are organized into categories inspired by the metaphors, history, politics and aesthetics inherent in these significant examples of modern architecture.

Clearly, the theme of the skyscraper is a topic for which there is wide appeal, evidenced not only by the sheer number of artists who have tackled the concept over the years, but by the public’s reception of the exhibition, which I happily witnessed during a museum free day. It seems too simple to laud the show’s curators, Chief Curator Michael Darling and Curatorial Fellow Joanna Szupinska, for producing a show that is so much fun. But the intrigue, surprise and curiosity generated by "Skyscrapers" are indeed those reactions to be most valued in art.

The skyscraper is a wide-open metaphor, and for some of the best pieces in the show that openness is paralleled by an experiential accessibility. Jan Tichy’s "Installation No. 3," a tiny paper structure on the floor through which a tiny video is projected, is an intimate theatre that draws viewers in close –a compulsion I repeatedly saw enacted by the very youngest visitors who dropped immediately to the floor to study the miniscule characters of the film. And while Tichy charms us through scale, Vito Acconci’s work dominates the gallery, the skyscraper-as-phallus theme is clear in "High-Rise," a manually operated contraption that erects a giant painted member right up to the ceiling. This work, originally created in 1980, was updated for “Skyscrapers” and with its newfangled machinery seems even better equipped to elicit both awe and hand-muffled giggles.

Not that “Skyscrapers” is all fun and games. In this century, the image of a skyscraper must contend with the events of 9/11, and the works in the exhibition that address it are suitably pensive. In Hans-Peter Feldmann’s "9/12 Frontpage," the artist presents a collection of the world’s newspapers of that day; each paper has been photographed and digitally reproduced on identically sized paper, a standardization that not only unifies the subjects despite their differences in language, but also captures those moments in a medium that will keep them from fading.

“Skyscrapers” is decidedly not what you’d expect of a show with this theme, and truly succeeds in expanding how we think about these familiar forms. After navigating room after room of gems too numerous to mention, a viewer will find herself at the exit of the exhibition, encountering Tasset’s "i-beam" once more, though this time it doesn’t read as clean slate, but as a symbol overflowing with meaning.