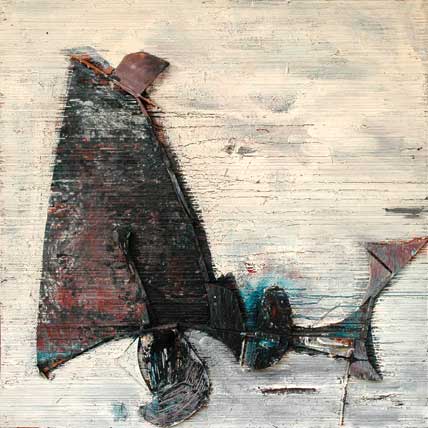 The tangled roots of SoCal consciousness are excavated and on display in this suggestive group show curated by Jeremy Tessmer for Santa Barbara’s Sullivan Goss Gallery. The show is an amalgam of California artists associated with Los Angeles and linked by a thematic darkness that has been labeled “L.A. Noir.” It follows a logic that will be familiar to those who have visited the gallery’s thematic group shows in the past, in which figurative and abstract artists both well- and lesser-known are brought together in an attempt to research and re-imagine the history of California through visual culture. The approach is particularly useful in this instance, perhaps because the impact of the fine arts tradition, especially in painting, has been underestimated in most previous accounts of California noir. Tessmer, like his mentor Frank Goss, shows an excellent eye for genre paintings that reveal hidden quirks and indicate larger trends and tendencies.

As do so many of the films and life stories of Hollywood in the sf, the show begins among the humble shadows of America’s failing, Depression-era farms. Boris Deutsch’s Untitled Barn Landscape from 1945 and Lenard Kester’s McSorlee's Farm from 1943 both dig in this noir dirt, but Kester’s work takes on an additional interest through some of the previously unremarked noir connections it unearths. McSorlee's Farm distills two major but seemingly disparate noir manifestations—Hollywood films and literary modernism—into a single startling artifact. When Kester painted McSorlee's Farm he was living with the writer Catherine Turney. Within a year after Kester painted this image, Turney collaborated with William Faulkner on the screenplay for Mildred Pierce, a film starring Joan Crawford that is now considered classic noir. Through its depiction of the tense relationship between a self-made woman and her spoiled, ungrateful daughter, Mildred Pierce makes images of small farms like this one read like slander or even blackmail notes—aggressive reminders of a shameful past.

The picture’s title, “McSorlee's Farm,” with its phonetic spelling, could be a reference to the work of poet e. e. cummings, author of the frequently anthologized poem “i was sitting in mcsorley’s” (1917) which contends that while outside in New York it was “beautifully snowing,” inside the famous ale house things were “snug and evil.” Seen in light of these alternate contexts, Kester’s painting of a broken down homestead uncovers the drab desperation from which both Mildred Pierce and cummings’ bohemian narrator seek to escape.

Leaving the farm for the city, “L.A. Noir” turns to the characters populating the city’s dark side. Francis De Erdely’s Self Portrait voids the eyes of the artist with negative space, suggesting that this Hungarian refugee has already seen too much. Paul Landacre’s Jungle Madness (1933) pits an anonymous figure against a threatening serpent that seems to have sprung directly from the expressionist print’s landscape background.  In The Black Widow and Female Impersonator, both from the 1930s, Ben Messick takes a jaundiced view of Los Angeles glamour and exposes the dreary effort behind staged performances of femininity. Lorser Feitelson’s Seated Nude from the Back (c. 1930) begins comfortingly enough with twin swaths of long hair emanating from the middle part of a partially hidden head, but soon takes a disturbing turn as the woman’s midsection grows wobbly and amorphous. Belly fat:
now there’s a real L.A. bogey monster.

Cubism makes its impact felt in several of the works, including Howard Warshaw’s horizontal car crash painting, Figure and Hydrant, of 1948-1950. Guernica would have been an influence here, as it clearly also was on the work of Rico Lebrun. Lebrun’s cubist Study for the Magdalene (c. 1950) was created as preparation for the Crucifixion Triptych. This outstanding portrait marries the social protest of Picasso to the humanism of Georges Rouault, yet the result is curiously similar in appearance to Willem De Kooning’s paintings of women from roughly the same period. What did Lebrun see in the Los Angeles of the late 1940s that led him to occupy this expressive crossroads where so many major movements in 20th century art meet?

The femme fatale of film noir reaches her contemporary stylistic apotheosis in Howard Warshaw’s startling and prophetic Goth Girl. The painting, which is said to have been owned at one time by the prince of horror, Vincent Price, depicts a pale woman dressed in black who would not be out of place at a concert by the band The Cure. It’s an arresting image made more powerful by the creepy artificial space in which the girl poses. Warshaw has a de Chirico-esque field day with such details as the shadow cast by her wiry dyed hair.

More recent manifestations of L.A. noir mix their predecessor’s negativity with an affectionate attitude towards the genre as style that would be out of place in the earlier works. Robert Townsend’s 2008 painting, Some Like It Hot, with its art deco “nudie” illustration inscribed across the matches of an oversized matchbook, looks more like kitsch than noir. D.J. Hall’s giant Nocturne (2004) promises the night but only delivers night “lite.” Best of all the more recent works are two from the late 1950s, when the shadow of noir was still free of pop-irony. These are Bentley Schaad’s Still Life of Oranges with Black Leaves (1957) and Edward Kienholz’s Untitled (1958). At its best, as in these two major paintings, the L.A. noir style cancels the immediacy of illustration with an edgy reserve of sinister implication. Although the Schaad looks like something, and the Kienholz very deliberately approximates the look of nothing, they coalesce around the same lonely place.