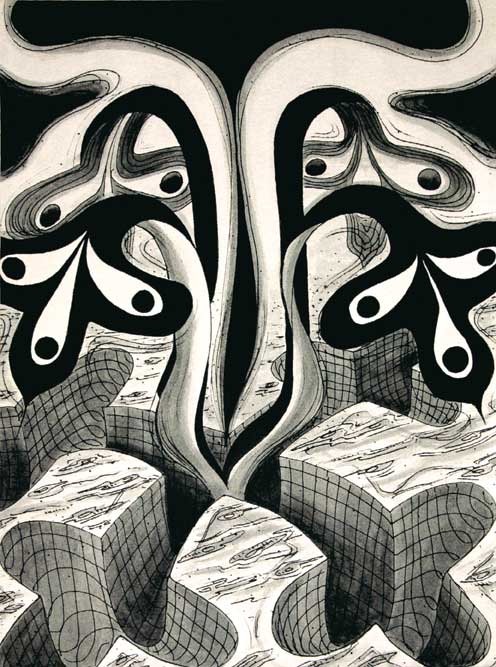 The art world seems to be embracing the idea of community during these difficult economic times: galleries are inviting in guest curators outside of the summer season and joining forces by combining spaces. Museums around the country are even Tweeting back and forth. This sense of fraternity is also an opportunity for lesser-known art regions to escape isolation by working together to promote art. Such is the case with “Neighbors: 17 Santa Barbara Artists in Ventura,” at Sylvia White Gallery. The loosely curated theme left the gallery open to invite nationally and internationally exhibited Santa Barbara artists to show their motley paintings, works on paper, photographs, sculptures and installations at the year-old Ventura space, as a sort of retrospective of what Santa Barbara’s foremost artists have been creating.

At the entrance of the exhibition, the viewer is greeted almost immediately by Keith Puccinelli’s large-scale work on paper, Foundering into a Spell of Endarkment. The piece, made up of six adjoined sheets, is a classic example of Puccinelli’s morosely humorous takes on the old clown. Delicate illustration in the detailed rendering of the man is juxtaposed against thick, cartoonish swirls of birds and stars buzzing around the subject’s wrinkled, balding head. As if he’s just been knocked over the crown with a rolling pin, his glasses dangle askew on his face and his tongue dumbly flops through his lips.

Rafael Perea De La Cabada’s nearly full-wall collage, Faces and Facets I, displays simultaneously both a loathing and fascination with the history of art. The Mexico City native seems to reject the classical sculptures and Byzantine paintings that he has collected images of by defacing them with manic applications of white paint over their reproductions. Yet he also seems desperate to write himself into the historical context of art by taking his pen to them and drawing various shapes of his choosing on top of their surfaces, impressing his art practice into that which came before him. Joan Tanner’s drawings on paper reveal a sort of diorama of the mind’s inner workings, but whose mind is never revealed. Smudges of black charcoal illustrate frustration alongside abstract characters in context-less settings. Colin Gray’s massive tapestry, Unknown Land #67, originally one of a group of three, stretches tall to almost nine feet. The black and white palette dramatizes the valleys of its science fiction-like landscape and highlights the mysteriously foreboding shapes rising up from its depths.