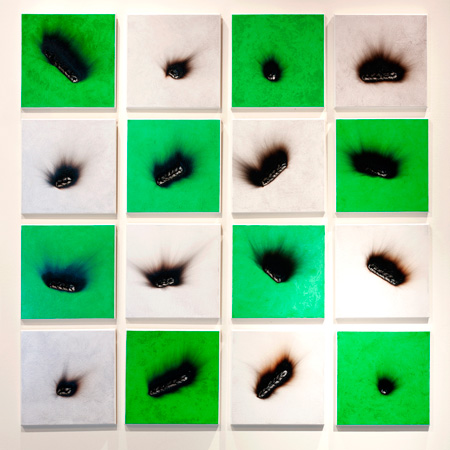 Following the course of Charles Ross’ major work "Star Axis" over the decades long development of the massive earthwork, it is no wonder that Ross, who is more than interested in properties of light, is expert in the movements of the sun and stars. “Solar Burns” is a descriptive title for his current body of work, in which he explores sunlight via its destructive capacity. By artful means he incorporates, in very literal ways, the concept of time.

Like timed exposures in photography (an inescapable comparison due to the direct use of light) the solar burns are a visual representation of time. "Solar Burn Week, Capricorn (12/26/07 - 1/1/08)" consists of seven burns displayed on seven planks of wood, one for each day of the week. The slight curvature of the burn marks indicates the season, as the earth’s position relative to that of the sun changes.

It is the sun itself that produces the solar burns. This fact intervenes between the artist and the art object, but also establishes the work as a kind of collaboration between maker and material. Ross is pulling in something larger than himself but focusing it in such a way as to commemorate in permanent form singular common events such as the passing of a day. One day is marked by the light of the sun etched into a panel. This single mark bears subtle but intelligible distinctions from those left by the sun’s passage on other days. The point is that inherent in the burn marks are traces of the day itself. An overcast day leaves a different mark than a day that’s bright and clear.

Intentionally or not the grid patterns in which all the burns are arranged, and the repetition of colors on the surface of each panel, bear formal comparison to the multiples of Andy Warhol. Though Ross’s "Solar Burns" share an affinity with scientific experimentation and astronomic observation, they are dominated by an overarching interest in aesthetics. The presentation is minimalist. The burns themselves possess their own inherent beauty.

The genesis of particular marks can also be intriguing. For example in a grid of 16 squares, each corresponds to Albrecht Dürer’s magic square in the German artist’s "Melancholia." Each of Dürer’s numbers is represented here in terms of minutes, signifying the duration of the exposure to the sun. While the work itself comprises older examples of Ross’ burns, there is some newer material as well. The solar burns are an ongoing interest for Ross, and he makes the obsession fascinating. His being able to build a rich body of work based on tracing the passage of time through such a simple series of marks attests to the power of art.