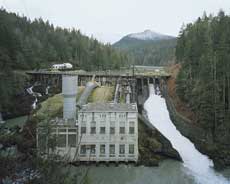 For his third solo show in Seattle since 1998, 35-year-old Eirik Johnson concentrated on photographing declining backroads areas and backwoods people within Oregon and Washington. Like his older colleagues Mark Barnes and Glenn Rudolph, Johnson is poeticizing the collapse of a natural resource-extraction industry, timber, without the sentimental dimension that now appears a part of much Depression-era WPA photography. Johnson has also had solo shows in New York, California and Peru.

A mixture of medium-size (24" x 30") and large-scale (40" x 50") color prints, “Sawdust Mountain” differed from Barnes’s and Rudolph’s precedents in that Johnson does not focus as much on the presence of the human figure in the environment, at least in the grouping at G. Gibson that is drawn from a forthcoming publication. A few exceptions, like Erin Rieman Along the Siuslaw River, Oregon (2006) and Juan Abalos salvaging cedar shingle bolts, lower Hoh River, Washington (2007), do not carry the same compassionate humor inherent in Barnes and Rudolph. Instead, Weyerhaeuser sorting yard along the Chehalis River, Cosmopolis, Washington, and Elwha River Dam, Washington (both 2006), among others, carry a more portentous, ominous vision that veers closer to photography’s original documentary impulse. The Elwha Dam is slated to be destroyed in a controversial move to restore salmon spawning grounds. Touching on photography’s ability to document “then and now,” one hopes Johnson will return to the site to report on the visual aftermath of such an enormous and possibly unnecessary engineering project.

Shipwreck and Salmon Fishermen (2007) and Scrapped Train (2006) come close to romanticizing the region’s industrial decay; so deft is Johnson’s artist’s touch for beautiful color and perfect composition. His few portraits of downtrodden residents border on the patronizing. As with Richard Avedon’s series on rodeo cowboys, no one will ever suspect Johnson lingered long after the staged sittings.