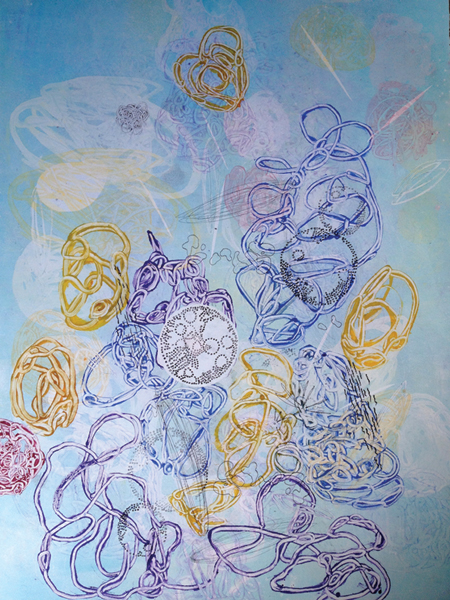 In the front area of Denver's enormous Space Gallery is a duet, "Inside/Outside" that pairs Colorado artists, Judy Campbell and Karen Scharer. Campbell, representing "Inside," creates mixed-medium abstracts that begin as collages and are completed as paintings. Campbell relies on instinct and automatism to arrive at her compositions describing each work as its own journey. In several, printed paper with text is used for the grounds, resulting in her annexing found compositions created from the print layout, on top of which Campbell paints--sometimes using stencils--geometric shapes, especially bars, checkerboards, circles and boxes. Scharer, who is obviously the "Outside" part of the title, lives in the mountains. She has said that she is influenced by her surroundings, though her paintings are not depictions of scenery but instead are completely non-objective compositions. The one aspect of her work that reveals the importance of her home environment is the palette she embraces, filled with the toned-up natural shades that are standards in the high country with stunning blue skies, sumptuous green meadows and aspen groves, and spectacular purple mountains enveloping her every glimpse, among a host of other strong shades.
"Inside/Outside" at Space continues through July 7.

The crowded exhibition "Parson in Perspective" at the funky and bohemian Z Art Department showcases a range of work by one of the deans of contemporary sculpture in Colorado, Charles Parson. The exhibit is anchored by Parson's brawny and macho signature sculptures, which fall into the conceptual abstract category. In these works, constructed from found and ready-made materials including steel beams, chunks of stone and concrete are held together by visually emphatic industrial connectors. At first glance, the sculptures have an architectonic character, and could almost be building fragments, but there's a lot more going on than that. Parson refers in some of the pieces to the landscape, in others to the figure, and in still others, to both at the same time. These references are hardly literal though, and are instead very abstract to the point of being non-objective with horizontality standing in for the landscape and verticality for the figure. In overall forms the sculptures suggest various ceremonial objects, including stiles, altars and gates, infusing the work with a vague and unspecified spiritual content. Supplementing the sculptures are related wall-relief pieces and drawings.
The Parson show has been such a sensation its run has been extended through July 30 at Z Art Department.

Eric Michael Corrigan, a painter and installation artist who's inspired by Pop imagery--and Pop Art--has joined forces with abstract sculptor Mark Castator in the exhibit "Save It For Later" at Walker Fine Art. The two met through the gallery and became fast friends, even collecting each other's work, making this collaboration a natural for them. The unifying idea that connects the disparate works of Corrigan and Castator concerns the issues of reality. Corrigan focuses in on the rapidly changing formats of recorded music, with each subsequent development erasing the one that came before and using this dynamic as an index to the constantly changing concepts of human interaction. For him, these changes represent loss as the collections of albums--or books or art, for that matter--that people use to define themselves, slowly disappear. Castator, using a variety of metals, exploits the reflective qualities of the highly polished materials to raise questions of perception and self-perception. But the elements on view are just one part of the show with Corrigan and Castator employing social media as part of the experience, and recording with video and audio equipment the experience of viewers as they encounter the exhibit.
The show goes through July 28 at Walker Fine Art.

Emerging artist Jenny Morgan, whose "Kith and Kin" is on view at Plus Gallery, launched her career right here, interestingly enough, when she worked as an intern while a still a student at the Rocky Mountain College of Art and Design. Morgan, who today lives in Brooklyn but maintains her presence on the Denver art scene, is a conceptual realist who focuses on reinterpreting the portrait. Technically her work is remarkable for its accomplished painterly character with an astounding level of hand-eye control in conveying these photo-based faces and figures in paint. Though she definitely owes much to the photo-realists, strictly speaking, she is not one of them. In her paintings she captures various special effects, like playing with images that are in focus in places and out of focus in others. In certain pieces, some areas have been blocked out, in others details have been obscured with veils of paint. Morgan has specialized in the unusual field of the self-portrait, and a good deal of her oeuvre has involved painting herself, sometimes in the nude. But she has also painted her friends, colleagues and has even done some commissions. The Morgan show at Plus Gallery runs through July 14.

Brazilian-born, Boulder-based artist, Rosane Volchan O'Conor is the subject of "Introductions" at the still newish Goodwin Fine Art. The show is part of a series of exhibits running in galleries throughout the city this summer that are meant to highlight artists new to the local scene. This series is being sponsored by the Denver Art Dealers Association (known as DADA), a membership organization. O'Conor creates works on paper--most often monoprints--that have all-over compositions of scribbled lines. They are clearly derived from Abstract Expressionism. She then translates these thoroughly non-objective pieces into large installations based on them, turning her scribbled and transferred lines into three-dimensional forms created from sticks, neon tubes, gauze and other materials. The effect for viewers is not unlike entering an abstract painting or drawing. O'Conor has said that in conceiving her works, she is influenced by an array of sources ranging from microscopic life to music, and though there is a chaotic quality to her pieces, they are also somehow balanced and harmonious. The show will feature a selection of her works on paper along with a single related installation.
O'Conor's show at Goodwin Fine Art opens on August 10 and runs through September 1.

Among the attractions that will wrap up the summer schedule at Robischon is "The Surface Beneath" featuring new paintings by Dirk De Bruycker and installation work by Brandon Bultman. De Bruycker, who was born in Belgium but who now divides his time between studios in New Mexico and Nicaragua, creates atmospheric color field paintings using unorthodox materials including asphalt and cobalt dryer. The paintings have a layered look with drawn elements being obscured by blobs of color. De Bruycker has said that heÕs attempting to reconcile the tragic and the beautiful--with the latter clearly winning the contest--that is based on his observations of the natural world. Of particular importance to this goal was his witnessing a swarm of ants devouring a butterfly, the poignancy of which literally changed his aesthetic outlook.

Bultman is a young emerging Denver artist whose work concerns domestic life and his own biography. Though the details of his pieces for this show are not yet known, his signature work is marked by his expert technique and craftsmanship, and his use of language to contextualize his pieces.
"The Surface Beneath" including pieces by De Bruycker and Bultman opens at Robischon Gallery on July 19 and goes through September 1.