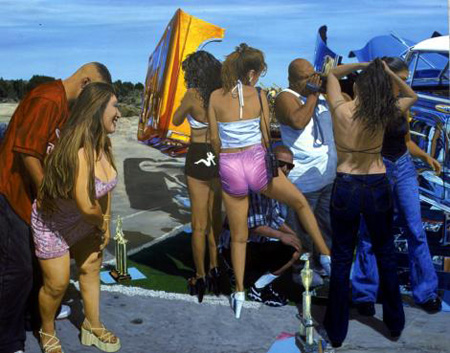 There ought to be no one in the Los Angeles art world who has failed to make the obligatory pilgrimage to one of the most important sites of public art in the city – the famed Victor Clothing Company. One of the beloved treasures was a mural at 242 S. Broadway painted in 1981 by John Valadez. When the building was sold for loft conversion, conservationists and historians were alarmed, but in 2009 collector Peter Norton stepped in and purchased the 60-foot streetscape of the street in the heart of downtown. Although this mural is not in the exhibition in La Jolla, it sets the stage for the works to follow.

Many of those works comprise Valadez' retrospective, "Santa Ana Condition," not in Los Angeles but La Jolla, a few short miles from Mexico, and this exhibition is indeed border art. For decades Valadez has portrayed the Chicano community of the post-civil rights period. Despite the modernity of his subjects, his materials are old-school: oils, pastels and drawings, and his extraordinary portraits, such as "Calvo," evoke the past in his gracefully billowing zoot suit pants – all dark hair, golden skin against a sleeveless t-shirt and wary pose – are as solemnly straightforward as an old daguerreotype.

The people Valadez seeks out are not fully assimilated. "Getting Them Out of the Car" (1984) is the story of a gang fight, men and women struggling and dying, trapped in the dead-end of a social death trap. Despite their marginalization, the Chicanos have proudly remained a sub-culture of Mexican traditions, fully developed with its own history: distinct clothing and car culture seen in the recent series, "Dulces, Gingerbread, Car Show, Chevy Twins and Emerald Tiptoe." Here in panoramas of  “courtship rituals” we see the pride in lovingly crafted vehicles, symbols of shining manhood, surrounded by sexy young women, savoring that fleeting moment of hotness that will be cooled by time. Valadez notes that the owners save up for a chrome fender the way others might put money aside for a European vacation.

Although the artist takes notes with his camera, the “realism” of his art is not “photo” but hovers between the extremes of candid captures of slices of Mexican life and an enchanting magic realism. "Beto’s Vacation (Water, Land, Fire)" (1985) is a huge pastel triptych, and a tour de force of pastel handling, especially on the foam tipped waves and the wraiths of smoke. It seems real but it’s pure fantasy, keeping its tale secret from the viewer. Water and fire – the bipolars of California – reappear in "Pool Party" (1987). Here the characters, standing in their backyard next to a swimming pool, are facing the viewer, oblivious to the huge red conflagration steadily approaching from behind.

Some of the shifts from reality to dream are in the interest of telling a panoramic history: "Mesoamerica" (2006) unfolds from the vividly pink mastodon to the white Quinceanera dresses. "Gaviota" (1987), which depicts a woman in a pink bathrobe and pink fuzzy slippers straddling a stream of water, evokes the sinister tone of Rene Magritte or Gregory Crewdson. In speaking of this painting, Valadez stated that he want to move beyond traditional portraiture to “allegorical questions.” “These are stories,” he says “that I don’t know where they are going to go … it’s all very mysterious.” As an artist, he has learned to trust himself and his imagination so as to capture these magic moments while allowing them to hover without closure.