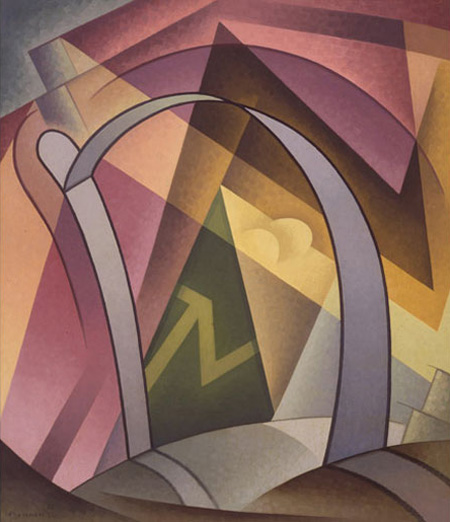 When the exhibit “How the West is One” closed earlier this year, venerable images like Gerald Cassidy’s "Cui Bono,"  dubbed the “Mona Lisa of the Southwest,” a painting practically synonymous with the New Mexico Museum of Art, disappeared from the walls and back into storage. Some work by well-known artists, Georgia O’Keeffe and Joseph Henry Sharp among them, were filtered into an ongoing exhibition, “Treasures Seldom Seen.” But the long running “How the West is One” was the museum’s core exhibit, representative of its extensive collection. Therefore, it is with great delight that several of the works of art from the previous exhibit, including Cui Bono, and quite a few more long buried treasures, have reemerged in “It’s About Time: 14,000 Years of Art in New Mexico.”

Despite curator Joe Traugott’s knack for punning, the title is no joke. “It’s About Time” is an extensive exhibition, covering everything from early Pueblo pottery to the Transcendentalists to the contemporary, including major movements in Modernism and Post-modernism as well as historic periods like the Spanish Colonial. “It’s About Time” takes a grand view. Such an endeavor necessary risks a loss of substance in favor of gloss. After all, how much can you convey about a historic period with just a few examples? But the gamble pays off, and Traugott offers viewers a lot to sink their teeth into, while managing, as in “How the West is One,” to conflate New Mexico’s significant artistic legacy with work that shows the museum’s own collections to good effect.

Granted, some of the older artifacts — Clovis points dated to circa 1200 B.C., Chaco pottery from 1050 A.D., Rio Grande textiles from the American Colonial period — are on loan from the museum’s sister institutions, but the bulk of the art is its own and it’s a timely exhibit. For much of the past decade, the museum has shied away from collection-based exhibits, instead playing host to traveling shows, including a bona fide blockbuster or two. Times have changed and such exhibits are costly. With “It’s About Time,” and other recent shows. The museum has turned its focus inward, and it works here because the heady mix of "It's About Time" establishes a clear focus by showcasing work, such as contemporary examples of the santero tradition, that represents a fusion across cultural lines.

The specter of the July 16, 1945 detonation of the first atomic bomb haunts the post-war period, existing as a kind of dividing line between the historical and the contemporary, perhaps even more so in New Mexico than elsewhere. Recognizing that, “It’s About Time” prominently displays a magnificent blowup of the detonation, shot by an unknown photographer. Subsequent works, made after the bomb, took on somber tones as some artists, Bruce Nauman among them, became preoccupied with mortality. But others embraced technology, and it's a credit to the museum that it recognizes artistry not only in fine arts but in design as well. James Parker’s "Ratz," a racing motorbike, is an example. The exhibit comes full circle with a contemporary example of ceramic work by artist Diego Romero, who infuses Pop aesthetics into designs inspired by historic Ancestral Pueblo pottery, examples of which start the exhibit but here have the final word.