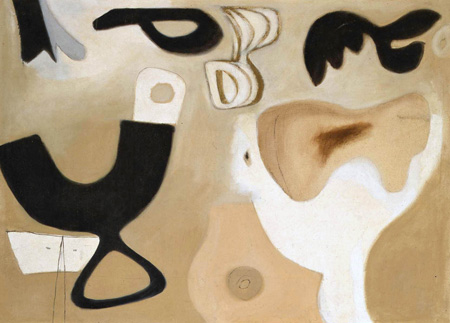 The rectangular grid of bars or stripes was the format in which Agnes Martin (1912-2004) arranged her compositions. Little of her early work is available in museums or private collections because Martin, unsatisfied with the paintings she made before the minimalist grid works she is known for, destroyed them. Fortunately for us the curators have tracked down those few paintings that survive and present them in a contextually rich, historical exhibition, “Agnes Martin: Before the Grid.” Encompassing two large galleries on separate floors of the museum, “Before the Grid” comprises early works from the 1940s and 50s and weaves them into a telling portrait of the artist's emergence as a modernist painter.

“Before the Grid” offers, through ephemera such as personal letters and photographs, and a chronologic arrangement of work, a narrative of artistic transformation. Underlying it is the troubling thought that, had these paintings not already been under other ownership, they would not exist.

Given our relief it must be said that the artist's early work itself is often derivative of  the artists who influenced Martin, such as Jozef Bakos, one of the avant garde Los Cinco Pintores of New Mexico. One can also detect the influence Joan Miró in her take on the expulsion from the Garden of Eden. The painting rides the line between representation and pure abstraction. Wall text in the exhibit indicates that some of these paintings were made as a student, so it makes sense that she experimented with various techniques. But the spatial relationships of forms within her work, even at their most abstract, seem to contain the seed for her later work, one might say a proto-minimalist aesthetic that is decidedly anti-action painting. Martin never embraced the all-over style favored by so many of her contemporaries. By the late 1950s the grid comes into play. “The Spring,” for instance, a two-toned painting reminiscent of Mark Rothko’s color field works, is dramatically different from pieces Martin was doing a decade before, especially from early portraits, but retains a feeling of pure objectivity, an idea of arrangement that is a defining characteristic of her oeuvre.

The decision to place earlier work in an upstairs gallery, and later work on the main floor would seem to reverse the logic of a chronologically arranged exhibit. But a permanent gallery of Marin’s grid paintings already exists on the main floor, so it is a reversal that makes sense. The later work chosen for the show is also more appropriate to the newly built gallery where it’s located. The upstairs gallery is in an older part of the building that feels, despite its large size, like a more intimate space.

A selection of photographs in the upstairs gallery are all that remain of several paintings that never survived the artist’s purging of her pre-grid work. The subtext is a tale of an artist’s intent to establish a pure aesthetic. Ultimately, it tells of rejection and dissatisfaction in the pursuit of that ideal.