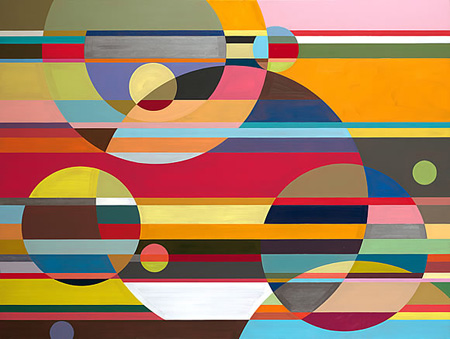 While only five years have passed since Robert Townsend had his first solo exhibition, the now 37-year old painter has garnered a well-earned reputation as a leading practitioner of pop-photorealism, whose lineage and influences include Warhol, Rosenquist, Bechtle, Ruscha and Theibaud. Interestingly, in addition to its jazzy visual rhythms, bright and cheerful colors, Townsend’s brand of photorealism presents a whimsical nostalgia for a mid-twentieth century working class sensibility, and a slightly kitschy American vernacular (with a distinctively recognizable California vocabulary) that the artist is in fact too young to have experienced first hand. Not insignificant as well is Townsend’s selection of watercolor for these pieces, a medium not generally associated with photorealist painting.

Indeed, as this show confirms, boldness seems inseparable from this Downey born-and-raised artist’s brand of that genre. Townsend presents thoroughly abstract works in oil paint on wood panels that venture one hundred and eighty degrees from his well-established camera-based oeuvre. The artist created each piece with a compass and a ruler (from which the series’ title, “Compass and Line” derives) signifying a newly employed mechanical operandi or aid that depends this time as much on the hand as it does the eye. The method nevertheless retains and sustains the poetic feelings of lyrical optimism and lightness so characteristic of and attractive in Townsend’s realistic work.

A geometrical, hard-edge look has replaced Townsend's pliably painted Pop in this body of work, and a remarkable blend of art historical markers are at work in these paintings, like musicians performing in symphony orchestra. Therefore the interlaced bands of color that stream through two roughly tangent circles in one piece both introduce and integrate references to Jasper John’s iconic target works, the colorful constructions of Charles Arnoldi, the hued tone poems of Ellsworth Kelley, and the shimmering optical stimulations of Josef Albers and Bridget Riley.

Each of Townsend’s titular "Compass and Line" paintings on variously sized rectangular panels blend circles and bands of wide-ranging colors.  However, more than formal exercises, these pieces have allowed Townsend to further develop his already sophisticated sense of visual composition (not to mention his skill in laying down paint) in a manner unencumbered by the requirements of the quotidian objects and scenes in his photorealism work.

Nor must a viewer stretch his or her art historical muscles back farther into the early part of the twentieth century to also detect in these pieces Malevich’s ideal of a universalized spiritual purity, Kandinsky’s colorful cosmic explosions, Mondrian’s rigorous mind grids, and Cezanne’s planar geometries. One might even time-travel Townsend back into a class of Maholy-Nagy’s at the Bauhaus during the 1920’s, where the Hungarian artist would instruct his students to produce art that they could make only with a ruler and a compass.

In truth, however, Townsend has ventured into what represents for him this new aesthetic territory not via the road map of academic study. Rather he has instinctively mustered the courage to produce work markedly different than the kind he has already exhibited successfully. Certainly, this speaks well for the future of this still youthful artist and his work, no matter what form it might take.