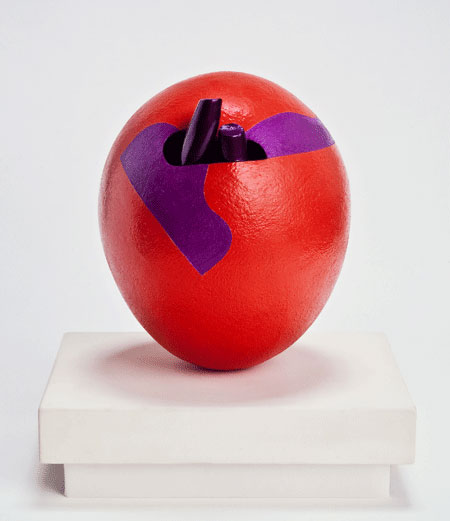 Walking into this small but elegant gallery is to walk into the early history of post-war sculpture of the late 1950s and early 1960s. Massive structures by Peter Voulkos and John Mason loom above the biomorphic forms by Ken Price. This trio of artists defied fine art tradition by using a culturally devalued material long associated solely with craft: clay. Ceramic art at the time connoted decorative and barely functional objects that were beautifully made for the aesthetic gaze. It was Voulkos who first grasped the modernist concept of "truth to materials" and understood how abstraction could be applied to ceramics. These twin insights, that clay did not have to make a functional object and that this malleable material had inherent properties that could be explored and displayed, led to "Clay's Tectonic Shift."

Using only slip, not glaze, Voulkos began to handle clay in an aggressive manner. Huge structures, such as "Snake River" and the ironically named "Vase" are dark and violently amassed upward through bending, slashing and mashing. The writhing of such works is counterbalanced by the art of his associate, John Mason. Some of Mason's most famous structures, such as the magnificent "Red X" are traditionally glazed and clean lined, clearly responding to the linear rather than painterly tradition. Even his flat clay walls, made of rough-hewn clay slabs, resembling expressively hacked pieces of wood or stone, are contained in a rectilinear structure.

If Mason can be placed somewhere between Ab Ex and Minimalism, then Ken Price,who died in January, is the Pop artist of the trio. Price gravitated away from the rather overbearing Voulkos, his teacher at Otis, and rejected the concept of mass and violent use of materials. But the young artist was also heretic in the eyes of the clay community. His clay works are small, exquisitely made, and as such a definitive return to craft hybrid objects that are painted with acrylics in strong vibrant colors painstakingly applied in many layers. Price made egg-like shapes, for example "L. Red" and "S. L. Red," out of which worm-like protrusions of a complementary color tentatively protrude. A cross between Pop Art and Surrealism, eggs, such as "Specimen" and "White and Gray," become precious when placed reverently in beautifully made Cornell boxes.