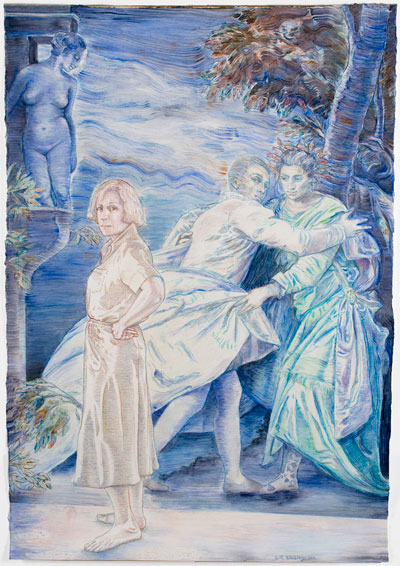 Who better to feature as Pacific Standard Time draws down than a woman artist/administrator/thinker who was the first to have works featured in our epoch-making Woman's Building alongside Judy Chicago, and among the first women to hold the typically male dominated position of university Dean?

Ruth Weisberg headed the USC Fine Arts department for over two decades. She simultaneously exhibited worldwide, published extensively on art, taught studio courses and mentored students-turned-successful artists. In the important but often Machiavellian world of arts academia, where the girls are apt to succeed when they act most like boys (craving the limelight, hoarding credit, cleaving to the singular genius role, guarding the gate, purveying the attitude of an elite priest/patriarch class suited best to explain and lead), Weisberg retains in art and life a graceful authenticity, generosity, and an uncompromising rigor.

This profile of the artist as a humanist and deeply studied thinker isn't just the ode of an admirer, it's a matter of record and a window for understanding a tenaciously figurative, Renaissance-rooted practice. Her sources - Old Testament narratives, Tintoretto and Titian, her dreams, her biography - can seem in quick assessment only remotely related to the overall radically experimental picture of L.A. art over the last 30 years conveyed by Pacific Standard Time.

In fact, the classical, the modern, the liminally contemporary, as well as the raw and personal tumble around, bleed into each other in this lovely overview, smartly hung with lots of air between each work so that we are not distracted by their complexity and can spend some reflective time engaging content and process.

As for process, every work here points to the way Weisberg excavates or literally discovers her image and idea in the doing. By alternating again and again between firm mark and erasure, clear image and overlay, Weisberg sets up this visual synthesis/antithesis that permits a finished work to coalesce, to emerge out of rich abstract fields. In "Time and Time Again" two lovers rendered loosely, like they may or may not be there, embrace before Weisberg's study of Titian's famous "Sacred and Profane Love." That 16th century painting showed the two guises of 'woman' as imagined through Renaissance patriarchy - the innocent, demure nude seated opposite her alter ego, an adorned, worldly temptress. Scholars think this Titian may have been an engagement gift to instruct a soon-to be-bride on the 'duties' of womanhood. In front of her take on the image, Weisberg adds present day lovers repeating centuries old negotiations of intimacy. The image seems to imply that masculine culture indeed sets the limits of male-female relations, but can never quite fully inscribe or explain what the body feels or the memory recalls.

Equally complex in concept and execution, in the way it addresses social and very personal reality is "Now, Then." This image is full of smart, tiered references: to identity, to the constraints the past places on the present, to Freud, to pre- and post-feminism, to the  isolation/exhilaration that faced female creators in earlier generations and confronts young women yet today. "Now, Then" includes a lovely portrait of the artist's daughter isolated in a busy studio. Offspring 'stands in' so to speak for parent, assuming the role of a young, fiercely alive but somehow still searching female creator.

There are wonderful citations of Goya that seem to wonder, just as the Spanish master did, where the heck we are headed as a species. There are events recalled from Weisberg's life in the same dense but not quite fixed style that echoes perfectly the nature of remembrance. There are images that visually cite Old Masters so as to equally acknowledge and reclaim from a female lense art's history<<. Whatever the subject,>> nearly every work interrogates aesthetics and culture even as this über learned mind pays homage to her lineage.

Both in process and content Weisberg shows an unusual comfort with calibrating oppositions: studied precision as against intuition/discovery, a kind of visual mining for existential universals sitting alongside the acutely individual. The pre-modern world toyed with the first terms in these tensions, the modern celebrated the second ones, and the so called post modern gave up on the fiction that these or any other cultural/tribal binaries are ever  actually separate. If we agree to this, then Weisberg is both an artist who transcends her moment and is very much of her time.