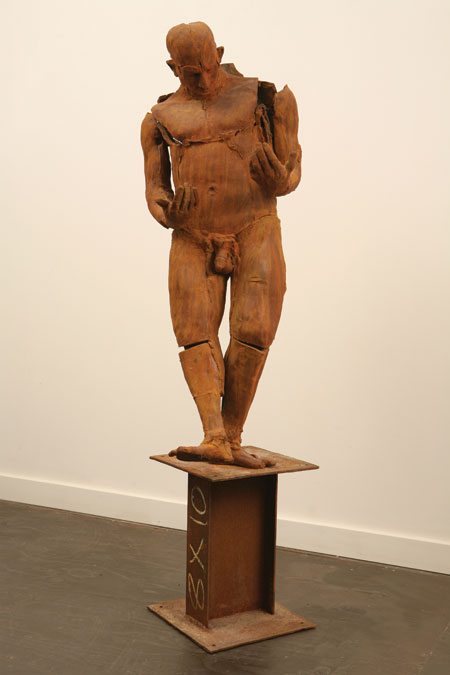 Paul Metivier’s second Seattle solo exhibition at Gallery IMA followed seven years after his 2001 graduation from the University of Washington graduate program in ceramics. He subsequently taught at Bellevue and Green River Community Colleges nearby. The eight stained, fired-earthenware sculptures included human heads on pedestal-posts and two full-length torsos, one freestanding, the other wall-mounted. Building on the dreary, grotesque works of his teacher at the U.W., figurative sculptor Doug Jeck, in sculptures like Anatomy Lesson #2 (2001), Metivier is more reductive and direct. Although he has claimed narrative as an important dimension, narrative implies plot, and with only one figure, there can be no plot—hence, no narrative.

Instead, the viewer is confronted with strikingly life-like heads of Caucasian and African-American males that have undergone considerable physical assaults of some sort: battering, puncturing, hacking and gouging. With such attacks, as in the 2008 Henchman #2 and Henchman #5, the viewer witnesses the aftermath of violence, but, poised and self-possessed despite their wounds, the heads also appear as if they were trophy animals in a hunting lodge. Anatomy Lesson #2 (2001) demonstrates how Metivier can turn the fragmentary into a vulnerable, satisfying whole. Bald and hairless, the full-length figure appears to be emerging into being. However, upon apprehension of its constructed, piece-by-piece nature, the viewer is fooled, knowing it cannot be real. Anatomy Lesson #1 (2001/2005) is more Classical, i.e., closer to ancient Greek sculpture up to and including its obvious breakage and re-assembling. Faux-antique, this work juts out from the wall without head or feet, but is actually more realistic than #2. Metivier is dealing with the history of figurative sculpture, toying with our nostalgia for its Western origins through a powerful technical mastery that underscores a considerable emotional impact.