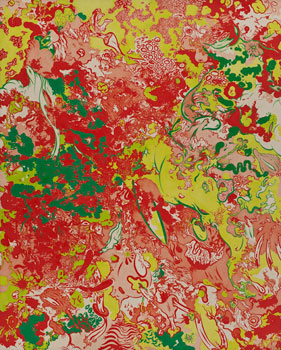 Sue Williams’ mini-retrospective of nine mid-to-large paintings, along with several smaller ones and a grouping of collages on wallpaper, which range from 1990 to this year, begs one essential question, which is simply this: how did she do it? That is, how did she manage to make the leap from her comically crude, feminist, scatological, cartoony work from the early- to mid-‘90s, to the far more nuanced, though still suggestively caricaturish, abstract work, that she’s continued to refine over the decades since? Unfortunately, it’s a question that’s virtually ignored here.

There are two large works of her raw, illustrative figurations from the early years, as well as several smaller versions. There’s a much broader representation of her mid-career to recent work - gestural, peristaltic caricatures of interior and exterior body parts-turned abstracted flora and fauna. It’s a satisfying gathering (the latter bodies) of Williams’ considerable achievement, a memorable fusion of underground comics, Big Daddy Roth, Terry Winters and Willem De Kooning.  The absence of work from Williams’ transitional period is glaring.  How does one reconcile the presence of an early ‘90s work whose heading screams “The Art World Can Suck My Proverbial Dick” (which, by the way, MoCA owns), with “Time Well Spent,” just across the room, a 2002 curlicue abstraction?

A headier question that arises is, How does feminism, an important bent in Williams’ early work, manifest itself in abstraction, however evocative that abstraction may be? The sentiment that’s been doled out on Williams’ behalf is essentially that her later work inhabits the arena of macho male abstraction and subverts it from within. But, based on what we get here, that interpretation feels like a strategic stretch. Though it is true that she frequently favors pink in her palette, Williams’ evocative, cartoon-haughty abstractions are ultimately gender neutral. And perhaps that’s a victory in itself, one that deserves far more play than the fact that her proverbial “fuck you” to the system is now in the hands of one of our most esteemed institutions. That leap could either be seen as some kind of maturing evolution, or more of an about-face that essentially represents some form of market complicity.  Without examples of work demonstrating how it came to be that Williams was able to get from point A to point B – specifically from the latter half of the ‘90s, just as she was making the transition from the more raw to the more refined, to put it simply – we instead wind up with a bit of transitional whiplash.