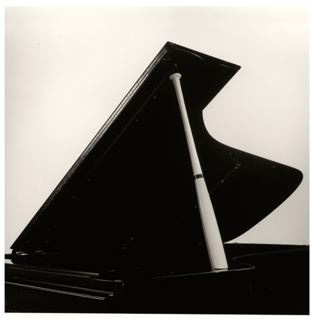 Absurd alliances, mutual opposites, juxtaposition: these are the terms that describe Spanish artist Chema Madoz’s photographs. For the most part untitled, the photos are a crisp, clean, and decidedly muted modernism cut by the cheek of odd unions. In one shot from 1997, a grass-covered pair of flip-flops sits atop a woven wicker mat. Like Merle Oppenheim’s fur-lined teacup where porcelain meets pelt, the spriggy grain of the grass in the sandals cuts against that of the more rational ground underneath. Unusual in the lot for its mixed media and nested images, and also from 2005 is a photograph of a photograph showing a volcanic mound with a real string piercing its orifice. The string is multipurpose, at once a black line, minimalist geyser of magma, and device hanging the photo from the wall. Madoz’s pictures favor a witty over a ruminative formalism.