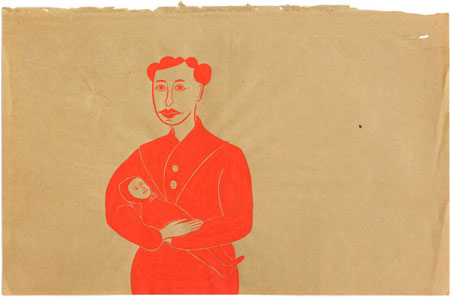 “Summer / Selections” is an excellent opportunity to view a healthy sampling of over 40 pieces, some of which have never been shown, by the late Margaret Kilgallen (she was only 33 when she died, in 2001). Kilgallen was a seminal member of what has been dubbed the Mission School, the graphic, folk-art-esque, street-art-inspired SF movement of the early 1990s that produced other such notables as Chris Johanson and Barry McGee (Kilgallen’s widower; the shared visual language between McGee and Kilgallen is evident in both artists’ work).

Kilgallen’s art is deeply rooted in craft, in particular that of sign-painting. Further lending a hand-hewn feel is her use of roughly sewn-together canvases and repurposing of paper. But what is most captivating about Kilgallen’s work is her use of line, shape, and color, and the attention cast on everyday subjects and objects: trees, leaves, faces, shoes, and even simple repeated patterns. With minimal crisp, smooth edges used to delineate her graphic, highly stylized depictions filled in with only one or maybe two flat colors, Kilgallen operates with maximum efficiency to maximum effect. The commonplace is elevated to a level of rich meaning; Kilgallen speaks in elegant visual haikus.