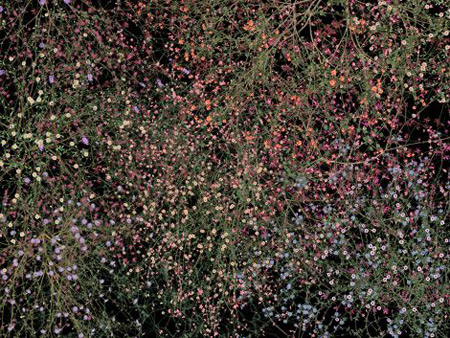 On the surface, brilliant yellow, luminous orange, and bright blue flowers seem to have little in common with Madame Currie's theory of radioactivity. A cursory viewing of Jennifer Steinkamp's video projection installation, created for this space, reveals some clues, in particular, the scientist's interest in gardening. The Rambler rose and marsh marigolds, among others, are mentioned in her daughter Eve Curies' biography. But, only after spending time tracing the movements of the clusters of colored flowers projected on the three giant walls of the gallery does the full impact of the piece hit.

Like sub-atomic particles, the beautiful blooms gyrate and flow, recalling seldom-considered revelations from Chemistry 101: Solid objects are mostly empty space; atomic particles are in constant motion, even in the most solid of objects. Mostly, it is the beauty embodied in the structure of the unseen world and the wonder of discovery that the viewer senses.