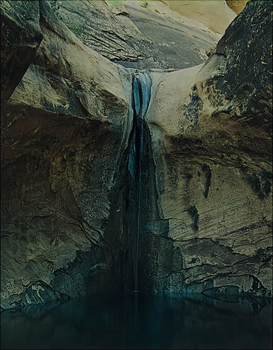 Photography has long been regarded as a medium that mechanizes the gaze. As a form of seeing that completes the development of linear perspective, its surfaces are even, continuous, predictable, and artificial. As a result, it suggests objective laws of representation, simulates the vision of a stable observer, and refers to a time characterized by deeply invested beliefs in linear progress. Uniquely suited to a scientific world view, its modality sets the standard for legitimizing the domination of its subject.

Nonetheless, "Earth Now: American Photographers and the Environment" substantiates the medium as an instrument adequate to responsible explorations of our contemporary landscape. Curated by Katherine Ware, the exhibition demonstrates a sophisticated theoretical self-awareness. The wall texts at once recognize the deleterious effects of photographic production while locating the show's inclusions within a lineage of landscape photography, taking as its chronological point of departure works by Ansel Adams. Adams and others like him effected change in national environmental policy, and this is a distinct part of the ethos here. As Ware suggests, "rather than proposing answers, their aim is to motivate us to think about our choices and their impact, and to forge a path forward based on our own conclusions."

Principally comprised of recent works by thirty-three photographers, the exhibition traces the evolution of landscape photography from its roots in depictions of the American wilderness to investigations of contemporary land use. Diverse in aesthetic and ideological positions, the show's highlights include Richard Misrach's agitated images of landscapes pockmarked by bomb craters, Brook Reynolds' scenes of nature renewing itself within vestigial sites of a crumbling industrialism, Bremner Benedict's conflicted depictions of power lines stretched across austere swaths of desert, and Dornith Doherty's nearly abstract lenticular prints depicting the simultaneous delicacy and germinating capacities of seed vault holdings. In all, the exhibition provides a timely exemplification of the means by which today's photographers register and relay our changing world and its increasingly antagonistic representations.